Yes, Virginia, That WAS a Reference to The Movement in Last Night’s Arrow

No, not the Miley Cyrus documentary. Why is that even a thing?

None of us at Geekosystem are that up on Arrow anymore. However, some of us are big fans of The Movement, Gail Simone’s recent DC title about vigilante teen superheroes in the newly-invented Coral City. So, we were pleasantly surprised to hear that the comic got a brief mention on the show last night. Beware of spoilers.

Again, we’re not up on the show as it’s currently airing, so we might be wrong on the exact details. But from what we can tell of people who watched the episode, “Blast Radius,” the villain-of-the-week, a villainous bomber referred to as… well, “The Bomber,” was mentioned to be a member of an anarchist group called “The Movement” at some point in the episode.

We’re guessing they have no plans to use any actual Movement characters now, of course, but if they did, bringing them in as antagonists to Oliver and the gang would be a super interesting story arc — though considering that the bomber was later revealed to be Shrapnel, a well-established supervillain in the DC Universe, we’re guessing that he isn’t exactly working in the best interests of the ragtag bunch we already know and love. At the very least, it was definitely a great one-two punch of DCU shoutouts for the hardcore fans.

Gail Simone confirmed the news this morning after checking in with some of the Arrow writers. Naturally, this excited her (and us) immensely.

Just heard from the ARROW writers, that the MOVEMENT reference was ‘ABSOLUTELY” a reference to the comic. Very cool!

I am sure it’s not happening, but how could would it be to see Mouse and Tremor and Burden and Virtue and Vengeance Moth on ARROW?

I’m pretty sure I speak for all of us when I say that a show based on The Movement would be a thousand percent more interesting than literally any recent ideas DC has had for new TV programs. Hour Man? Please. Vengeance Moth is where it’s at. 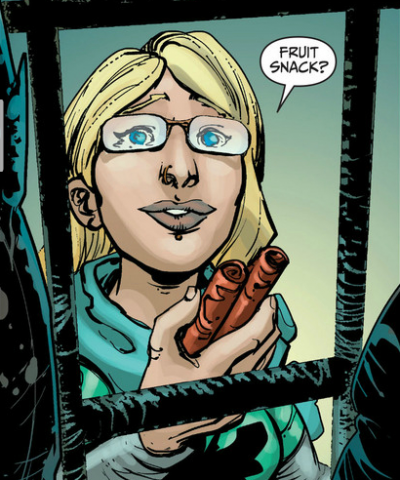