DC is making questionable decisions, the sky is blue, etc. 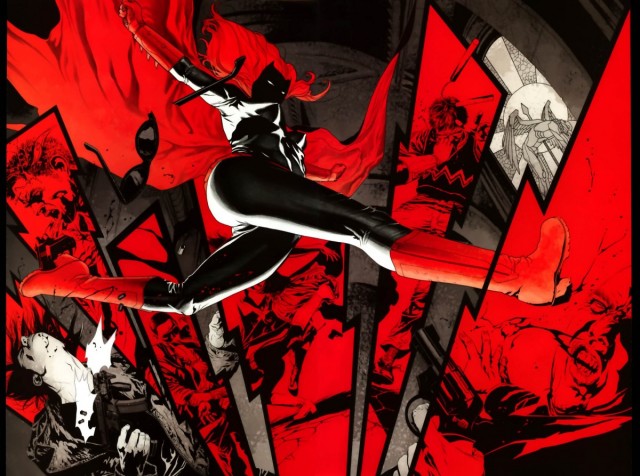 If you hate sadness and poor decision-making, you may have avoided reading news about DC Comics lately – and, after Batfleck, who would blame you? [Ed note: Batfleck is great. – Glen] But with the recent news about Batwoman, things seem to keep getting worse for the comics giant.

First, J.H. Williams III and W.H. Blackman – the creative team behind the multiple-GLAAD-award-winning New 52 Batwoman comic – walked off their jobs, after the powers-that-be at DC refused to allow Batwoman to marry her female fiancé. The very same day, the comic conglomerate announced a contest wherein you can audition to be a DC artist by drawing Harley Quinn; of course, one of your Harley panels has to be of her naked, in a bathtub, about to commit suicide.

Naturally, people who aren’t the worst were fairly incensed about all this, especially in the wake of the controversial decision to cast Ben Affleck as Batman in the Man of Steel sequel.

But at the DC Comics panel at Baltimore Comic-Con, DC co-head honcho Dan DiDio attempted to mitigate fan freak-out by making a personal statement about the Batwoman controversy and announcing a new writer for the series.

“When we introduced Batwoman back in 2006, we took a huge risk at DC Comics – we went and did something unprecedented: we made one of our major characters gay,” said DiDio. “When we did it, we knew there would be controversy and complaints, and there were. We got hit with so many different letters and so many nasty emails,” but DiDio clarified that they “stood behind th[e] character 100 percent.” DiDio maintained that DC denied Batwoman a marriage simply because the Bat family “shouldn’t have happy personal lives.”

So I guess we should be congratulating DC for being so brave in facing down some nasty e-mails in their commitment to daringly depicting a gay character, while also accepting that – somehow – not getting married is more sad than, for instance, having Batwoman’s wife die, or be maimed, or having her go through a nasty divorce. Seems like some pretty sketchy logic, DC.

DiDio then announced openly-gay writer Marc Andreyko (best known for his run on Manhunter) as the new head writer on Batwoman. Andreyko released the following statement on his Facebook page: 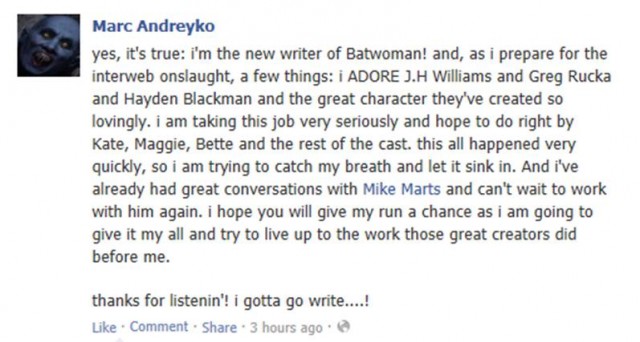 So that’s that for Batwoman. If you’re still feeling down about the whole ordeal, don’t forget that Marvel made Northstar’s marriage to his long-time partner Kyle a huge summer event in 2012, so at least one comic giant is committed to being progressive.