The Inevitability of Roy Moore 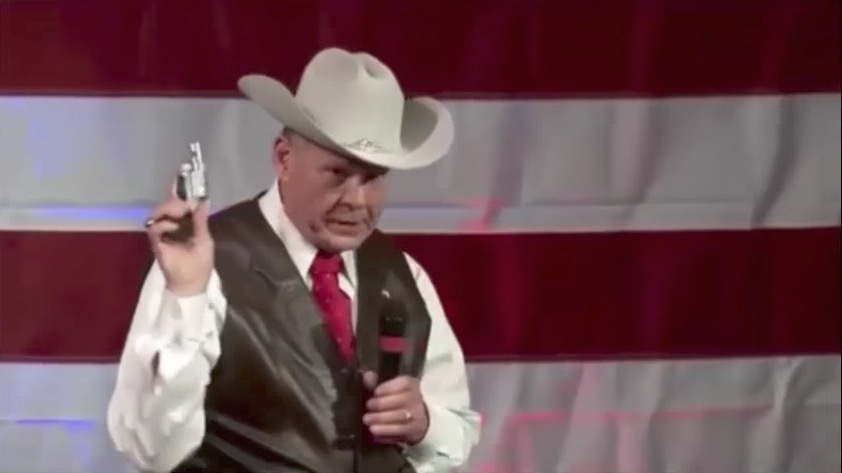 Roy Moore is a piece of garbage, which should have been clear before the accusations came out because he is a homophobic, racist, sexist terror—but the rape and assault allegations bring another level of depravity to the Steve Bannon-backed prospect for Alabama’s vacant Senate seat. Yet it becomes clear from online conversation outside of my liberal bubble, that people are very skeptical and distrustful, and with the nature of politics right now, the GOP may not want to support Moore, but they want the win.

That is the state of political tribalism now: people who claim they are followers of God are willing to back a man accused by multiple women of sexual assault and misconduct when they were underage and he was in his 30s. Rather than vote for a Democrat.

Politico posted an article today which claims that three editorials in Alabama newspapers have called Moore unfit to run and should step down:

“Roy Moore simply cannot be a U.S. Senator. Even if his party and many of its adherents still think it possible, it is unthinkable — for his state, and his country,” the AL.com editorial board, which feeds newspapers in Birmingham, Mobile and Huntsville, wrote. “Proof beyond a reasonable doubt is a consideration for the courtroom, not the ballot box. When choosing our representative before the rest of the world, character matters.”

“It’s time that he and his party read the writing on the wall: His candidacy is over. His true character has been revealed. It’s time for the GOP to remove its official support[…]And since he and his party can’t assure it, the voters of Alabama must.”

It is up to the voters. Apparently, it is too late to force Moore to stand down, Luther Strange is not capable of developing a successful write-in campaign, and they will not be moving the election to a later date. Moore at this point has more to lose from stepping down than staying “strong” and hoping that the core voters in his camp—evangelicals and other religious groups and the Trump-right—will stand with him.

CNN spoke to some Moore supporters about why they were still voting for him, despite what the allegations say:

Mike Allison, pastor of Madison Baptist Church, said he knows Moore as “a man of integrity,” he told CNN.
“I don’t even believe the allegations. There’s lots of fake news going around these days,” he said. “They’re allegations. How can he even defend himself against 40-year-old allegations? You used to be innocent until proven guilty.”
“I support him now more than ever,” he said.

“I’ve known him my whole life and I’ve never known him to do anything inappropriate,” said the Rev. Jamie Holcomb, of Young’s Chapel Congregational Methodist Church in Piedmont.

Tim Huddleston said he is a Republican who votes Republican.
“If they’re true, that’s bad (and) he needs to step out of the race, there’s no question of that,” he said. “The problem you have is all of a sudden — whether you’re Democrat or Republican — you can’t come in 30 days before the election and say here are some unsubstantiated allegations.”

“At first, I really wasn’t sure how I felt about the situation,” said Dottie Finch, “but then I look at it this way: I don’t have the best past, and to have it be brought up after years of speculation and never anything being said about it, I don’t know just because he’s trying to prove himself that now people want to come out of the closet and accuse him of things.
“And if it has happened, I believe the good Lord has forgiven him and he has the right to continue to prove himself.”
She said that she stands by him “100%” and that she will continue to support him even if the allegations are true.

Alabama state auditor Jim Zeigler used Biblical examples to argue that Moore’s relationships were not inappropriate. “Take the Bible: Zechariah and Elizabeth, for instance,” Zeigler said. “Zechariah was extremely old to marry Elizabeth and they became the parents of John the Baptist. Also take Joseph and Mary. Mary was a teenager and Joseph was an adult carpenter. They became parents of Jesus. There’s just nothing immoral or illegal here. Maybe just a little bit unusual.”

Marion County GOP chair David Hall told The Toronto Star that the allegations were irrelevant because of the time that has passed.
“It was 40 years ago,” he told the Star. “I really don’t see the relevance of it. He was 32. She was supposedly 14. She’s not saying that anything happened other than they kissed.”

Pastor Bruce Jenkins of Young’s Chapel Congregational Methodist Church said he’s known Moore to be a fair man.
“I don’t know what’s happened in this country where a man isn’t innocent until proven guilty,” he said. “It’s not fair to comment until it’s proven or disproven.”

While some have changed their minds, the core of those who are party voters and want a hardcore conservative in office are willing to forgive and forget, and elect Roy Moore to be the senator of Alabama. Yet these same ideas of wanting to forgive and allow his history of assault to be an issue between Moore and God, and to wait for “fair information,” doesn’t apply to the LGBTQ communities, immigrants, Muslims, minorities, and women who seek abortions. Funny thing about that.

The chances of Doug Jones, the Democrat running against Moore, winning is unlikely. Still, the best thing Democrats and liberal-leaning voters in Alabama can do is throw their support behind Jones. It has been twenty-five years since Alabama elected a Democrat to the Senate and ten since a Democrat won any of its statewide offices. But it is important to stand up.

Jones is a former District Attorney who prosecuted a Klansman who was responsible for the 1963 Birmingham Church Bombing that killed four young girls and triggered the Civil Rights movement. He is running on a platform to keep going forward with health care and ensuring that women keep access to birth control. Jones supports a living wage in Alabama as well as equal pay, believes in climate change, and in reforming the Criminal Justice system: “I believe that the United States of America is a land of laws, justice, freedom, equality, and opportunity. I will take those values to Washington, and keep fighting for what’s right – whether it’s popular or not.” He is an excellent candidate, and any votes that he receives is a vote towards a bluer and more liberal Alabama.

Or just an Alabama that doesn’t have an alleged sexual harasser/rapist representing them in the Senate. Isn’t the Oval Office and Supreme Court enough?

At the same time, we need to ask the question: what, if anything can be done about fixing these tribalistic mentalities? If Republicans are willing to vote for Moore because they don’t want the Democrats to win then that goes way beyond politics. It is a winning-above-all team mentality that doesn’t belong amongst the people who are supposed to be running our country. As voters, we must hold our elected officials to standards higher than our own. Pro-choice, LGBT and race issues are important to me, but if a Democratic candidate was accused of the things Moore has done, then it would be a no for that candidate. I wouldn’t vote Republican, I’d probably vote third-party, but regardless I would not give my vote to someone who is that morally and criminally depraved.

So why would other voters? This is not a question I am able to fully answer, but what I do know is that since the election, people have been asking how we can reach the white, straight, and rural Trump supporters who feel neglected. Well, now those supporters are using their power and attention to elect politicians who support hate and promote sexual violence.

What is the point of “draining the swamp” if you put in the literal garbage in its place? What is the point of talking about how fake the news is when you don’t believe your own citizens? And how the hell does supporting conservative values mean supporting a man who would take advantage of young woman he has power over? What are we doing to ourselves?