Roy Moore Is Proof That Republicans Will Support Pretty Much Anything, Including Child Abuse, Before Denouncing One of Their Own 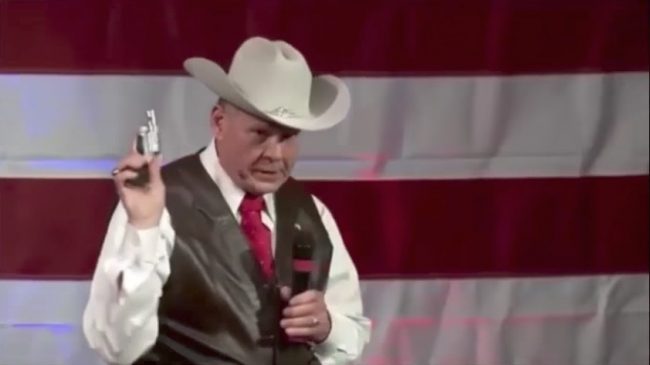 If you’ve ever wondered if there’s anything–anything at all–that would make Republicans denounce one of their own at the risk of losing an election to a Democrat, Roy Moore is proof that for a lot of them, the answer is a hard nope.

Political tribalism is definitely a plague that affects both Republicans and Democrats, with both sides frequently valuing their party above all else. But a lot of Republicans and conservative pundits are now in a position where they have to either condemn a Republican Senate candidate or justify his molestation of underage girls, and they are choosing to support the candidate.

If you somehow missed what’s going on with Roy Moore, the Alabama Senate candidate has been accused by multiple women of sexual assault and misconduct when they were underage. Three of the women say Moore tried to kiss them and took them on dates when they were between the ages of 16 and 18 and he was in his 30s. (While the 18-year-old was of legal age, they met when he came to speak to her high school class, which is at best an icky power imbalance. He also reportedly gave her alcohol on their “dates,” which was illegal.)

The fourth woman was 14 when Moore took her to his home and assaulted her. You can read the full description of her account, which includes a lot more than kissing, at The Washington Post.

Republicans are now in an awkward position of having to denounce Roy Moore and risk losing the Senate seat left empty by Jeff Sessions to a—*gasp*—Democrat, or find some way to ignore or support the sexual assault of teenage girls. A lot of them chose the latter.

Some are attempting to discredit Moore’s victims. They ask why it took decades for them to speak out. They claim the women are liberal plants, paid to accuse Moore–an argument that as far as I can tell has roots in some guy on Twitter claiming a friend of his wife heard it was true.

Breitbart has dispatched two reporters to Alabama with a mission: discredit the allegations against Roy Moorehttps://t.co/6PsOvNqHzJ

Moore himself doesn’t even deny the allegations. Mostly. He calls them false, but then seems to try to vague-talk around the specifics.

Sean Hannity just pressed Roy Moore on whether he dated teenagers when he was in his 30s. Moore said it would be "out of my customary behavior." pic.twitter.com/WDPM5IIu46

His justification of what he previously denied is that he never dated any girl without her mother’s permission.

Roy Moore to @seanhannity: "I don't remember dating any girl without the permission of her mother"

According to Moore, and also Sean Hannity who interviewed him last week, that makes the encounters consensual.

Immediately, Hannity faced backlash for his coverage of Moore’s alleged sexual assault. Twitter users began calling out his show’s sponsors, and Keurig, along with a few others, responded by pulling their ads.

Angelo, thank you for your concern and for bringing this to our attention. We worked with our media partner and FOX news to stop our ad from airing during the Sean Hannity Show.

And thanks to whatever twisted logic allows Sean Hannity fans to both still self-identify as members of the conservative right, the party of religion and “family values,” Keurig is being called out as the villain in this situation. The ones who took a stand against pedophilia and sexual assault.

Supporters of Hannity and, apparently, sexual abuse of minors, have taken to trashing their Keurig machines.

Sorry, guy, liberals aren’t “offended” by that. We’re more embarrassed for you and confused that the hill you’re choosing to die on is the defense of an accused child molester.

As for Roy Moore, he’s threatening to sue the Washington Post, and also attempting to shame his fellow Republicans into supporting him. Mitch McConnell finally spoke out against him, which in the eyes of alleged child abuser Roy Moore, makes him a liberal now.

There’s a lot about the Republican value system I don’t understand, but if speaking out against the sexual assault of teenage girls suddenly makes you part of “the swamp,” I officially give up on trying to find common ground.

I’m guessing the people boycotting Keurig make up a lot of the same group who make a big deal when Starbucks doesn’t put Merry Christmas on their cups or Mila Kunis donates to Planned Parenthood. Fine, enjoy your tap water and your political monsters.