History Lessons From Imbible, a Theater Show About Brunch | The Mary Sue

The Widow Who Changed Champagne, Adult Friendships & More Lessons From Imbible, a Theater Show About Brunch 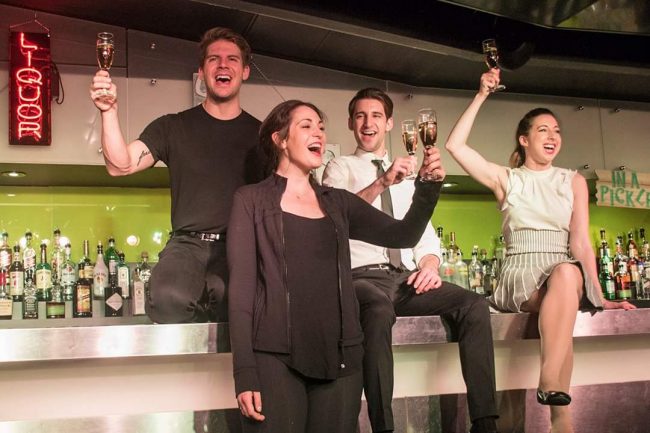 This may be the most New York City millennial thing I ever cover for The Mary Sue. Last weekend, I went to The Imbible: Day Drinking, an Off-Broadway musical theater show that takes place in one New World Stages bar that’s all about the evolution of brunch and its most popular cocktails: the Bloody Mary, bellinis, and Irish coffee. Accompanying this performance were three of said cocktails, made during the show, usually set to song.

The premise itself sounds a lot like what we think of brunch: a bougie, upper-class, Instagram-loving millennial practice that’s become a parody of itself. However, the show itself embraces this with friend group that feel cliches—a lifestyle blogger, a Kickstarting musician, an always-busy financier, and a guy just trying to get his friends together. The show itself displays self-awareness about these connotations and tries to have fun with them, though this makes it a show that might only be funny for a certain demographic.

Still, while it takes maybe a little bit to fully adjust your expectations, once you’re in the pace of things, the show is a laugh-out-loud delight. Admittedly, you are drinking more throughout the show and getting progressively more buzzed. Mixologist Anthony Caporale does a great job, and honestly you’ll probably leave happy from the drinks alone.

Not only is this a great boozy excursion, it’s also really informative. A dramatic reading of the 1894 article in Hunter’s Weekly by Guy Beringer titled “Brunch: A Plea” takes us to the meal’s early roots in British gatherings. Dramatic reenactments of coffee heists, a painfully earnest barista, and scientific explanations of how taste works bring us to Brazil, France, and the farmer’s market through song. Actors Nicole DiMattei, Luke Schaffer, Alex Herrera and Sarah Hinrichsen all have amazing voices and jump between historical and modern-day characters with hilarity arms with everything from a life raft to bubble machines.

Exploring the ways that brunch evolved or was adapted during, say, American Prohibition or The Sexual Revolution (one Cosmo article calls it the best meal to make your “friend” the day after) lends a new appreciation to the meal and its sociological significance. If you’ve ever enjoyed champagne in the past, you’ll probably love watching the story of how widow Madame Clicquot Ponsardin changed the entire industry and became one of the most important businesswomen of her time. Her company is still around and I can’t afford to drink what they make, but every time I see it I’ll think of this amazing innovative woman.

At the core of the show is also a story about friendship and how challenging it can be to maintain friends as a busy adult. During the early parts of your life, you cement connections through proximity—a science class, a neighbor, etc. Once you’re all graduated and working though, it’s easy to become flaky, over-booked, or simply see your gang as a lower priority. Life is not a sitcom where a close-knit gang meet every day in a quirky bar, unfortunately. Imbible is a big history lesson, but it’s also a reminder to value your close friends and reach out to them, even if it’s just for a few Bloody Marys.

You can learn more about the show here.