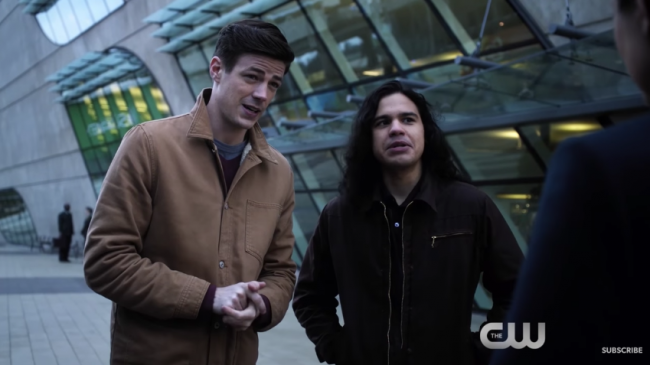 Last Tuesday night  fans of The Flash tuned in for the finale of its arguably most frustrating season to date. Between the repetitive—and sometimes confusing—ripple effect of Flashpoint, the totally preventable (but still a little awesome, in areas) saga of Caitlin Snow and Killer Frost, and the dangling fate of Iris West, “Finish Line” seemed to arrive right on time. One of the biggest sighs of relief came with Iris narrowly escaping the death that had been hanging over our heads for over half a season. With our team mostly intact (rest in caffeinated peace, H.R., you unlikely hero) and Savitar obliterated, it appeared that Team Flash finally had the space to regroup and Barry and Iris could focus on their happy ending.

But this is The Flash, and most of us have learned to brace ourselves for the inevitable twist. Season Three was no exception: with Savitar dead and Jay Garrick freed, the Speed Force was without the prisoner it required to remain stable. The earth was once again in a perilous state, which led Barry to readily sacrifice himself to the Speed Force as retribution for creating the Flashpoint that caused … well, just about everything. He left behind a bewildered Team Flash, who must now pick up the baton and protect Central City to the best of their ability. Whether this new arrangement is permanent remains to be seen, but his acceptance of his fate was not only emotional to watch, but rather convincing. It’s hard not to consider what a universe without The Flash—without Barry Allen—would look like. While he would most certainly be missed, a few positive, necessary changes could transpire from this.

As Barry prepared for his descent he essentially handed over the reins to Wally, dubbing him Central City’s new Flash. Watching Wally finally acquire his powers after so much anticipation (both his and ours) was deeply satisfying for many. Over the second half of the season we witnessed him slowly grow into his meta abilities with Team Flash’s help, but rarely did we see him shine on his own the way Barry did throughout his learning process. Without a Flash there to shadow, he’d have to adjust to his role as the city’s sole speedster on his own (barring the continued absence of Jessie Quick). It would be stellar to watch him develop his own instincts, hone his individual style, and grow not only as a hero, but as a person.

“Duet” revealed more than the serious musical chops of certain members of the Flash and Supergirl posses; it gifted us a glimpse of how Cisco would fare as one of the primary metahumans defending the city. After years of watching him build his confidence, we saw a Vibe that was not only highly capable, but an effective leader. Instead of getting more opportunities to see the emergence of a new (to Central City) hero, Cisco was relegated to the role of H.R.’s babysitter. With Barry occupying the Speed Force and Earth 2’s Harry Wells possibly returning to assist the team, this could give Vibe more room to flex his ability and show his home that he, too, is an asset. Additionally, with Cindy Reynolds (because I REFUSE to call her by that other name) revealing their connection, we might actually get to watch her stick around, help Cisco navigate the uncharted breadth of his powers, and work alongside him for a little while, as equals.

Iris West Gets the Attention She Deserves

The treatment of Iris West has been one of the most disheartening aspects of the show since its inception, but this season really highlighted just how much they’ve centered her existence around Barry. From the moment we were made privy to her potential demise, Iris’ main function has been to ease his mind about her death. In fact, The Flash has made sure that, if we take away absolutely nothing else regarding Iris’ role among the team, we understand that she is the consummate Supportive Partner, ready to issue a comforting pat on the back and a “This isn’t your fault, Barry” at the drop of a hat (even when it sort of is). The episode “Dead or Alive” marked the brief gander of the Iris we’ve missed: the incredibly courageous, determined investigative reporter with a passion for helping her city. She should absolutely be given the the room to openly grieve the loss of her lifetime love, should Barry stay gone. However, Iris West deserves a chance to exist as herself, for herself. She’s so much more than the loving girlfriend, and the absence of Barry might finally allow her to have her own stories.

Let’s be real: the likelihood of Barry taking permanent residence in the Speed Force seems very slim. And despite some of the more challenging facets of his dynamic with the others, he’d be a sorely missed component of the family that we’ve bonded with for three years. Ultimately, I’d like to see Barry return to a team with a renewed sense of purpose—one that allows all of its members to to be the fully recognized heroes we know them to be.