The Flash Mob: Season 3, Episode 11: The Team Gets Back in Sync During “Dead Or Alive” 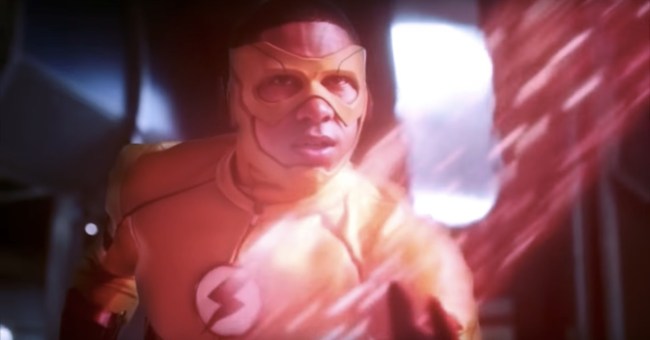 In spite of the life-or-death stakes of this week’s episode, The Flash managed to keep things light-hearted and peppy. How’d they manage that balance? Let’s chat about it! But be warned: there are spoilers in these parts, because of course there are.

In addition to being a Bon Jovi song that is now in my head, “Dead Or Alive” is also the name of this bounty hunter-themed episode, which revolves almost entirely around H.R. being on the run from a mysterious Justice League heroine with an unfortunate title. Cisco keeps hitting on this newcomer, probably because they have the same Vibe powers, although that flirtation gets sidelined by the fact that H.R.’s life is in the balance. Cisco agrees to a face-off with the bounty hunter, and Barry almost mucks the whole thing up by trying to take her out ahead of time. Classic Barry! It all turns out okay in the end, though.

Meanwhile, the B-story revolves around Iris, who reminds us that she’s a journalist. Do we feel like she’s gotten short-changed so far, having been relegated to more of a “girlfriend” role? She has some lines about that in this very episode, but perhaps she should be directing that sentiment at the writers’ room, not at Team Flash. Anyway, Iris is facing a death sentence of sorts these days, since she now knows the date of her death; that means she’s decided to start taking some bizarre life-threatening chances in the name of journalistic scoops. Naturally, this bothers her teammates.

What do we think of this episode, folks? Are you glad to see Team Flash getting back to light-hearted antics? Or would you prefer to see more of Iris’ story unfold?