The Cruelty and Danger of Anti-Choice Panic Over “Infanticide” 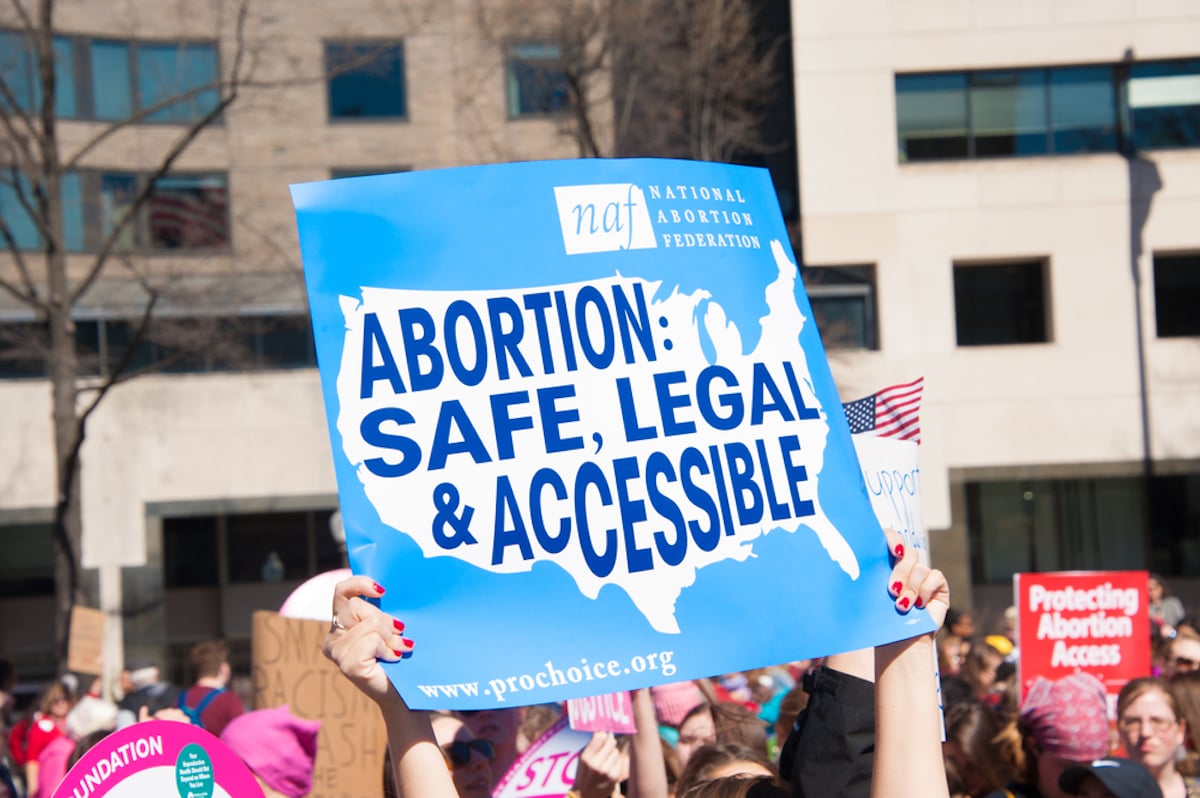 This week was a particularly emotional one for reproductive justice advocates, as a proposed Virginia law meant to fully protect the rights and safety of people who have abortions later into their pregnancies led to an onslaught of hateful and deceitful rhetoric from anti-choice politicians and leaders, who have taken to calling later abortions “infanticide” and “murder.”

Democratic Virginia state Delegate Kathy Tran introduced H.B. 2491, a bill to codify the right to third trimester and later abortions in extreme health circumstances. Of course, this right is already delineated in Roe v. Wade, and has saved untold numbers of women’s lives, and spared many others the devastation and trauma of being forced to go through the entire process of giving birth, only to watch their baby suffer and die due to severe health conditions.

As many advocates and medical professionals have pointed out, several tests to discover severe fetal abnormalities aren’t even possible until around 20 weeks of pregnancy, necessitating full protections for access to abortion care at later stages. About 90 percent of abortions take place in the first trimester of pregnancy, and bans on abortion at later stages are aimed to solve a “problem” that doesn’t exist. The only thing such bans accomplish is hurting women when unfortunate and often dangerous circumstances arise in their pregnancies.

But for all the misinformed, deeply ugly conservative outrage at Tran’s bill and Virginia Gov. Ralph Northam’s declared support for it, all their reasoning is just an excuse, and conservatives loathe abortions earlier in the pregnancy just as much. Opposition to later abortions isn’t somehow a sensible, middle-ground stance—not from the same people who support fetal heartbeat bans that effectively ban all abortions, and not from the same people who want you to think a pregnant person’s personal health care decision is somehow equatable to committing murder.

It seems it can’t be stated enough these days, but women and pregnant people are human beings with the human right to autonomy, safety, and privacy in their bodies; “personhood” is inextricably bound to bodily autonomy, and cannot be conferred upon unborn fetuses without first taking it away from a pregnant person.

Backlash against Tran’s bill has drawn medical professionals, advocates, and people who have had abortions to speak up in support of the bill, and reject the lies and misogyny its opponents rely on for their messaging.

“There are many reasons why patients have abortions after 20 weeks; complications happen as the pregnancy progresses, my patient’s health is impacted, and we perform tests to make sure the fetus is healthy. This is why this decision is made based on medical advice, not politics,” OB/GYN and abortion provider Dr. Daniel Grossman wrote on Twitter on Thursday. “Additionally, I see patients who need abortions after 20 weeks because the restrictions to abortion made it difficult for them to get care earlier. Everything from medically unnecessary waiting periods and ultrasound laws to shuttering of clinics and insurance bans create delays.”

There are many reasons why patients have abortions after 20 weeks; complications happen as the pregnancy progresses, my patient’s health is impacted, and we perform tests to make sure the fetus is healthy. This is why this decision is made based on medical advice, not politics.

The anti-choice movement’s reliance on spreading lies that invoke emotion and outrage is hardly new. This is the entire basis of the movement, offering a foundation for all its cruelty and contradictions. Speaking of contradictions, reproductive justice writer and activist Renee Bracey Sherman summed up the core of the anti-choice movement’s hypocrisy on Wednesday: “It’s irritating seeing conservatives up in arms about hypothetical abortion situations and willfully misunderstanding abortion, yet they were silent when two children died in ICE’s custody and as a pregnant folks miscarry in jails across the country due to lack of healthcare,” she wrote.

It’s so irritating seeing conservatives up in arms about hypothetical abortion situations and willfully misunderstanding abortion, yet they were silent when two children died in ICE’s custody and as a pregnant folks miscarry in jails across the country due to lack of healthcare.

Plenty more advocates, women, and people who have had abortions have also spoken out, and it’s their voices we should be listening to over the vitriolic, ignorant panic spewing from anti-choice writers and leaders.

Some have pointed out how access to abortion as an option, and certainly access to later abortion in more complicated circumstances, is fundamental to healthy family life, and women’s full access to public life.

“’If your mother had had an abortion, you wouldn’t exist.’ The best answer I’ve heard to that: ‘Actually, it’s because my mother had an abortion that I do exist,’” feminist writer Jill Filipovic wrote in a tweet. “Reproductive choice means women have options. It enables us to escape abuse, build healthy families, build our lives.”

Guardian writer Moira Donegan responded to a Twitter user who argued pregnant people who don’t want to be pregnant should face the “consequences” for their actions by pointing out how this frequent anti-choice talking point belies yet another hypocrisy: “Something I’ve noticed from the anti-choice brigade: depending on the context, pregnancy and parenthood are either unparalleled, beautiful miracles that women shouldn’t give up, or grueling and terrible punishments that women deserve to endure for having sex,” she said.

In a bitter twist of irony, Virginia’s H.B. 2491 has arguably never been more necessary. With Roe v. Wade and its full protections on the line in today’s judicial landscape, it’s incumbent on states to codify these protections into their laws. The horrifying depth of backlash against this bill should hardly be surprising from an anti-choice movement that routinely relies on lies, and even violence and scare tactics, to get its ugly point across.

Yet, pushback against HB 2491 and Delegate Kathy Tran feels even more abrasive than usual. The conservative fight against HB 2491 is rooted in the demonization and dehumanization of women and pregnant people, so we see them not as human beings with a wide range of experiences, circumstances, and needs, but as murderers. Language like this often yields alarming consequences—and needless to say, but if self-proclaimed pro-lifers actually cared about life and safety, they’d take a long hard look at what their words may incite.

A case that could dismantle abortion rights goes to SCOTUS

This week, lawyers for the Center for Reproductive Rights filed an emergency motion asking the Supreme Court to block legislation in Louisiana that would dismantle abortion rights. The legislation in question imposes medically unnecessary, difficult requirements on abortion clinics, and shuts down clinics that can’t meet these requirements. It could go into effect early as this Monday pending action from the Supreme Court, although there are some concerns about what it could mean if the Supreme Court upholds the law.

The Louisiana law would require abortion providers to have admitting privileges at a nearby hospital, which is simply unnecessary considering how objectively rare it is for abortion to result in complications necessitating an emergency hospital visit. In other words, the law is all about stigma and shutting down clinics, and is transparently ideologically motivated, as it has the potential to shut down the last remaining clinics in Louisiana, and force nearly all Louisiana women to travel out-of-state for basic health care.

In 2016, the Supreme Court ruled on a similar law in Whole Women’s Health v. Hellerstedt, determining that such laws created an undue burden for women seeking abortion care because of their large-scale effect of shutting down clinics. With a similar law now before them, advocates are now concerned the Whole Women’s Health decision could essentially be reversed, threatening to shutter access to abortion, and render abortion a right in theory only.

Two Idaho state lawmakers have introduced the Abortion Human Rights Act this week, a bill that would mandate that anyone who receives or provides abortions would be charged with murder. The Idaho state murder statute already recognizes the killing of a human embryo or fetus, but notably prohibits prosecuting women who have abortions or abortion providers, which makes it seem more likely the statute is meant to protect pregnant women from violence. However, the proposed bill would remove this key exception from the statute.

The bill mirrors similar, increasingly common legislation to sweepingly ban abortion via fetal heartbeat bans. Regardless of the constitutionality of such laws, they serve to reinforce and build upon abortion stigma, or potentially launch court battles that could make it to the Supreme Court and either dismantle or do away with Roe v. Wade altogether.

It should, at this point, go without saying, but these are dangerous times for women and pregnant people. The Trump administration has emboldened extremists and ushered in an era of normalized attacks on our most fundamental human rights. It’s never been more important to listen to the voices of medical experts, concerned reproductive justice advocates, and certainly, more than anything, people who have actually had abortions and deserve to be included in every single conversation that takes place about what we can and can’t do with our bodies.