The Col-Pop: Chicken Nuggets and Soda in One Cup 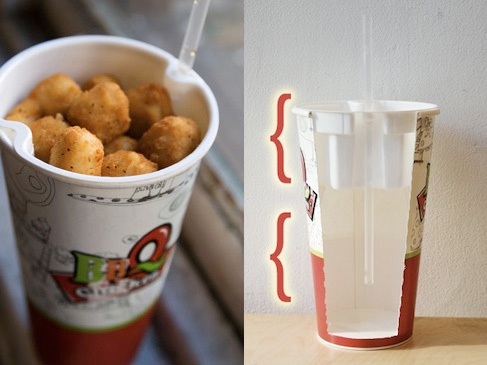 The South Korean fried chicken chain, BBQ Chicken (as of publishing this post, the link is broken, possibly due to an influx of traffic from one-handed customers who always had issues with eating chicken and drinking soda at the same time), has taken its place in society as the Apple of food innovation, by combining a cup of soda with a box of chicken nuggets to bring the world the Col-Pop, currently the best way to have a drink and eat fried chicken while leaving a hand free for texting you’ll see any day.

In a previous article, Serious Eats claims that BBQ (Best of the Best Quality, not barbecue) Chicken, is actually the best fastfood friend chicken around, so since beating other fried chicken products wasn’t possible anymore, adding it to a cup full of soda was the only thing left to do. Sadly though, the nugget version of the chicken doesn’t carry the “best fastfood fried chicken” quality as its non-nugget parents.

“What if I’m not particularly in the mood for chicken?” one may ask. Don’t worry. The Korean company, understanding people’s hopes and dreams, didn’t stop solely at chicken: Their sister company, BHC Chicken, has also found fit to add spaghetti, french fries and mozzarella balls to the Col-Pop container.

The Col-Pop container is not without its flaws (I mean, aside from being a cup of chicken and soda), as the combination of cold soda below hot chicken forms condensation in the chicken basket after around twenty minutes, potentially making the nuggets soggy, that is, if customers have enough willpower to resist the offspring of the best fastfood fried chicken around.