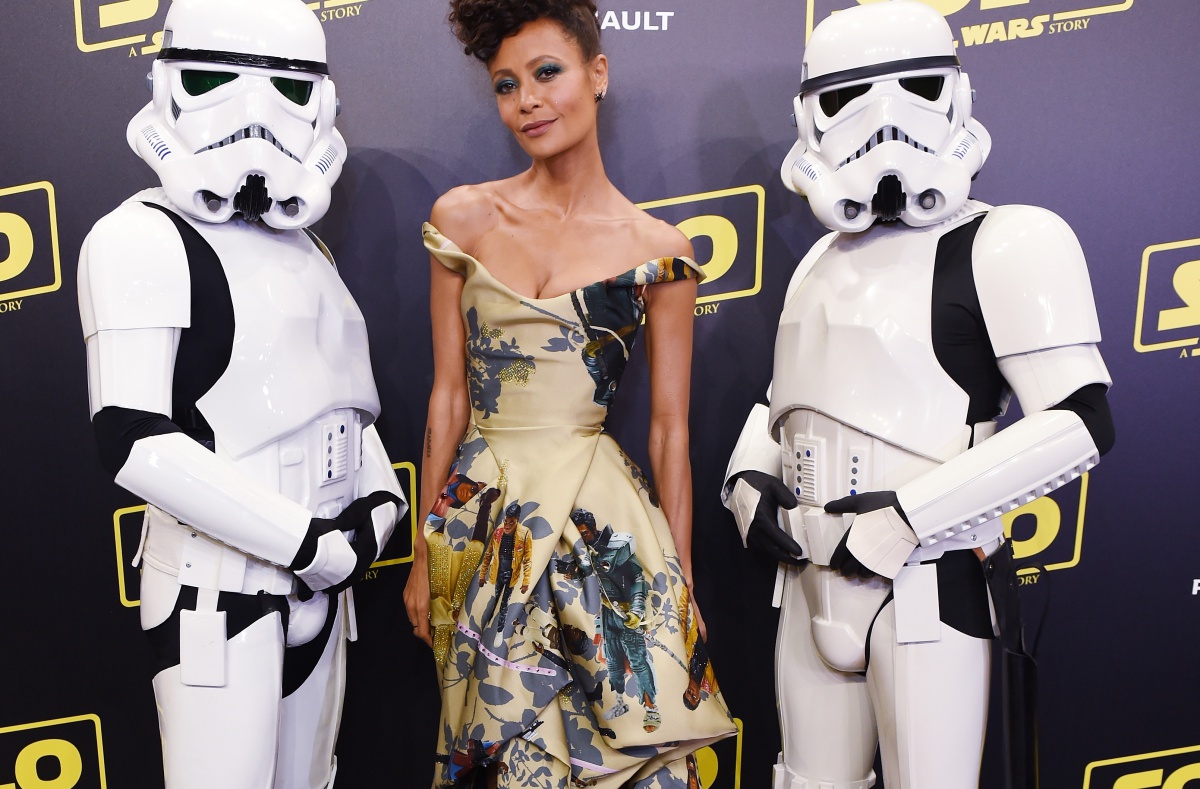 CANNES, FRANCE – MAY 15: Actress Thandie Newton and Stormtroopers attend a ‘Solo: A Star Wars Story’ party at the Carlton Beach following the film’s out of competition screening during the 71st International Cannes Film Festival at Carlton Beach on May 15, 2018 in Cannes, France.

Thandie Newton knows how to make a statement in a gown. When Solo: A Star Wars Story was screened at the Cannes Film Festival last night, Newton came dressed in a custom Vivienne Westwood gown with action-figure likenesses of all the black Star Wars characters that have appeared on screen before her. All five of them.

What we know so far about Thandie Newton’s character is that she is Val Beckett, Tobias’ wife (Woody Harrelson) and a member of his crew with some serious blaster skills. From the very beginning, Newton has been really excited about being part of this new era of diversity and female heroism in Star Wars.

“Thandie had the brilliant idea to make a dress covered in a print with photos of iconic black @starwars characters,” said Newton’s stylist Erin Walsh as she captioned the images. “She wanted to celebrate her role in the iconic history of the franchise!! She is the first black woman onscreen in a @starwars movie with a leading role.”

While Lupita Nyong’o’s does voice the character Maz Kanata, Maz is an alien, not a visibly black woman. Rose Tico, and her sister Paige, from The Last Jedi are the first significant onscreen women of color in a Star Wars live-action film.

According to Entertainment Weekly, “To create the print for the dramatically draped gown, photographer Christian Högstedt took pictures of action figures from Newton’s own collection, which were then layered over a pale gold and grey floral print. Newton’s stylist Erin Walsh shared a design illustration and some close-up photos of the fabric, which was embellished with Swarovski crystals, on her Instagram Tuesday.”