Review: Solo Is a Return to the Simpler Joys of Star Wars

4 out of 5 Millennium Falcons. 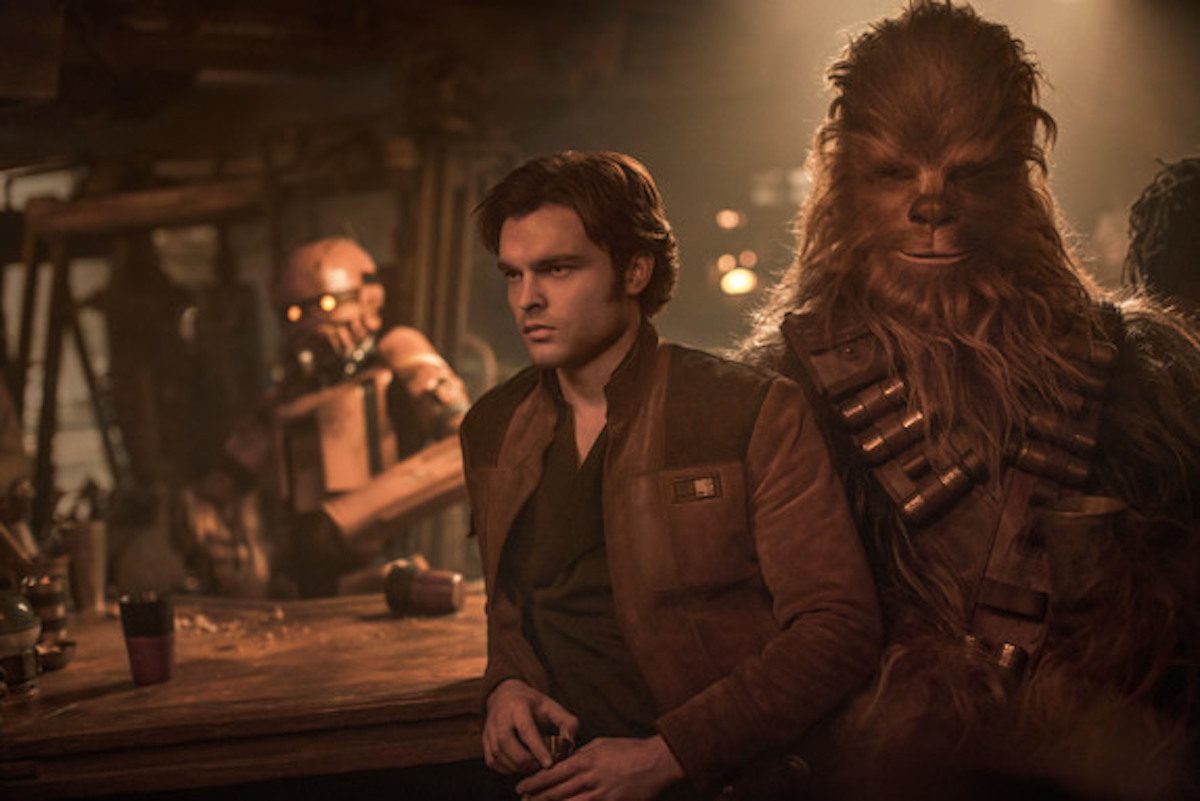 Solo: A Star Wars Story is a caper of a movie—really, a series of capers—that takes you through a galaxy far, far away mostly unconcerned with intergalactic warfare, the balance of light and dark Force-sides, or anyone named Skywalker. Solo wants to have fun, and it succeeds.

I’ll admit that I was down on Solo in the run-up to the movie. The production seemed plagued with problems, notably the firing of original directors Phil Lord and Chirs Miller (who were replaced by Ron Howard), and I was underwhelmed by the promos. I went in not looking forward to much save Lando’s prodigious cape collection.

But I take a good portion of my naysaying back, and gladly: Solo was the first Star Wars movie in a long time that gave me anything like the light-hearted thrill I first felt seeing A New Hope as a kid. And Solo is finally a Star Wars movie you can take kids to that they’ll be able to enjoy without the mass genocide of star systems getting in the way.

Though The Force Awakens and The Last Jedi are well-crafted films laden with nostalgia and bursting with intricate plotlines, there is little happiness to be found in their journeys. Everyone seems lost, frantic, and sad; much of the same can be said for the standalone Rogue One, in which absolutely everybody dies terribly in the end.

While Solo deals with some weighty issues—in a surprising and often poignant fashion—the fate of the galaxy is not on Han’s shoulders, and as a result, he gets a lot more space to have a lot more fun. I didn’t realize how much we needed some breathing room until we got it. 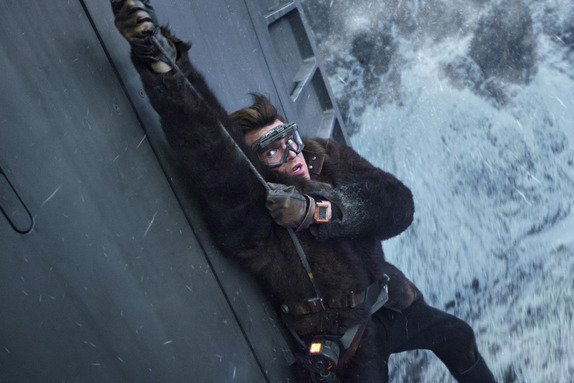 Solo is an origin story, rather in the vein of a superhero movie like Captain America: The First Avenger (complete with speeding train action sequence), only with a fair bit of comedy and an excellent amount of Wookiees. This one is Solo: The Thief Awakens. On paper, it’s the story of how a wily young man struggling to stay alive on the mean streets of Corellia breaks free and becomes one of the galaxy’s more successful smugglers, collecting a colorful group of characters along the way.

But Han isn’t just in it for the thrill or the money; it turns out his motivation is rather sweet. He has the beginnings of the cocky swagger we expect, but he’s trying to earn enough credits to buy a ship of his own for reasons of affection instead of just enrichment. His dedication herein is endearing and follows him throughout. It’s hard to roll your eyes too much at him whenever he gets into inevitable trouble (which he does, frequently), when you remember why he’s doing it. That’s also when we remember why we love Han Solo in the first place: despite his own intentions to the contrary, his heart is good and in the right place.

As Han, Alden Ehrenreich isn’t Harrison Ford or doing a Harrison Ford impression, and once you get over this dissonance, you can begin to accept his Han into your heart. Ehrenreich won’t win an Oscar for the part, but he has a bright-eyed presence and enthusiasm that works well enough.

He doesn’t have Ford’s gruffness or world-weariness, and for good reason: This Han has seen a lot of bad things, but he still has, well, hope. The universe hasn’t ground him down into pure cynicism yet. He’s eagerly opportunistic, resolutely resourceful, and ready to be made use of. This is a Han who wants to prove himself, even as he openly brags that he’s the best pilot around to anyone who will listen. He’s desperate for someone to test him at it. 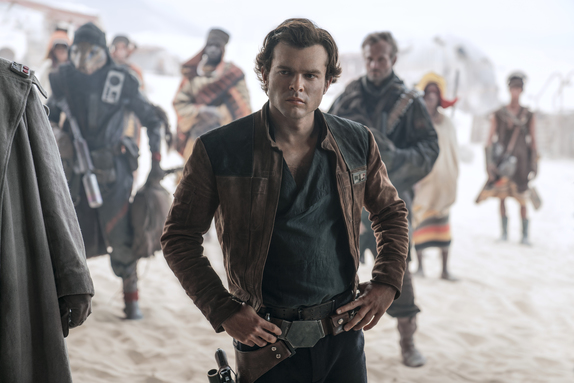 Since it’s not about the Force or the Empire or its detractors very much, Solo is ultimately a heist movie. It is, in fact, many, many head-scratchingly complicated heists, and herein is where the movie loses some steam and focus. There are only so many convoluted plans that we already know will go wrong in a hundred ways that one can take, and Solo has a lot of them. There are some action sequences that seemed to last so long that my hair and fingernails grew, and there’s an awful lot of drama and death and injury that come about for scores that don’t really seem worth it.

If you stick with the movie, however, the eventual payoff is satisfying and unexpected, yet still feels earned. It’s then that we figure out why all of this flying and running and blasting could prove to be important.

When I cite “the simpler joys” of Star Wars in my headline, I mean that there are many, many elements that we love most from the universe (and Star Wars‘ extended universe) that are done well here, often with a wink and tongue set firmly in cheek. Convincing creatures of all sorts, both wacky and dangerous. Evocative costuming and plenty of space jewelry (Carrie Fisher would be proud). Exotic parties with show-stopping alien musical acts. Crime syndicates run by awful gangsters and bold blaster battles and gambling pits of scum and villainy and Stormtroopers chasing our heroes on speeders. It’s all here, and no one wants to be a Jedi at all. It’s rather wonderful.

We meet new friends that will become old ones, and they are lovingly wrought. When Chewbacca is first introduced onto the scene, it’s so cleverly pulled off that I’m still smiling about it. Chewie (played by Joonas Suotamo, who should get an Oscar for Best Wookiee) is the total MVP here, probably my favorite character in all of Solo, though he never speaks a word that’s not in Wookiee.

Donald Glover is as splendid as expected as the card-playing charmer Lando Calrissian, smooth as silk and twice as slippery, but allowed emotional depths and an emotionality we might not have thought to see. And yes, the capes and scarves are fabulous. In fact, the whole movie looks lush and slick, with the Millennium Falcon’s interiors as young as the other characters and brightly gleaming. 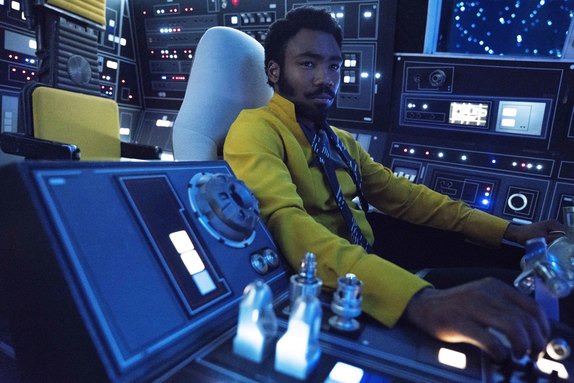 Lando’s right-hand droid, L3-37, voiced by Phoebe Waller-Bridge, is going to be a flashpoint of this movie. Brash, outspoken, and obsessed with droids’ rights, equality, and the liberation of her enslaved mechanized brethren, L3 gets some of the best lines in Solo, and she is going to infuriate a certain type of fan who will tweet-screech about “social justice” issues being injected into their Star Wars. But for me, L3 came out of left field and helped turn Solo into a movie deeper than its flashy surface, an element that Solo manages to bring back at its end with powerful effect.

The other main female presence in Solo doesn’t fare so well. Game of Thrones‘ Emilia Clarke feels miscast as Q’ira, a woman from Han’s past who becomes vital and complicated in the present. Clarke and Ehrenreich have little chemistry, which makes their scenes fall flat and feel less weighty than they should—especially when Ehrenreich has more chemistry with everyone else around him. Q’ira’s space jewelry is on point, though. 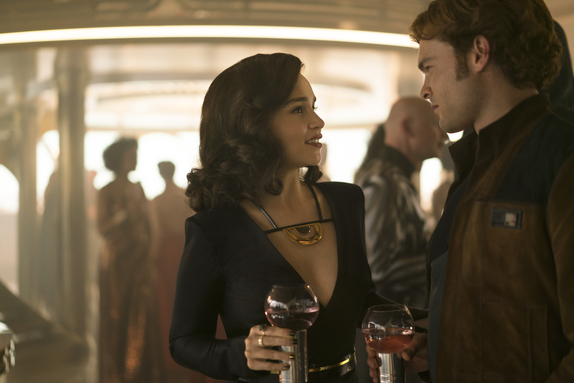 Q’ira is an interesting, yet ultimately thankless character to play, since we know that Han Solo is one day destined for Leia Organa— but it’s hard not to feel like a different actress could have made us care more about her decisions. At least Q’ira gets to go along on a good portion of the missions and contribute as much as the menfolk.

The rest of the cast picks up the slack left by the lackluster romantic gestures here. Woody Harrelson is compelling as Tobias Beckett, a sort of proto-Han who becomes Han’s mentor and develops a complex relationship with our hero. It rather makes you wonder what would have happened if Obi-Wan could’ve spent a lot more time training Luke. Or in this case, corrupting his worldview.

Thandie Newton, as Beckett’s compatriot Val, also does what she can with the material; it’s troubling that it’s taken until 2018 to have a black female character in Star Wars with a memorable speaking role, but if it had to take this long, at least we have an actor of Newton’s caliber embodying Val. Iron Man‘s Jon Favreau also has fun voicing another member of the gang, a chatty pilot named Rio.

As the crime lord Dryden Vos, Paul Bettany is glorious. Bettany doesn’t chew the scenery so much as tongue-kiss it, and he’s having so much fun purring menacingly about that you wish he was in every scene. I’ve never enjoyed a Star Wars villain more, period. 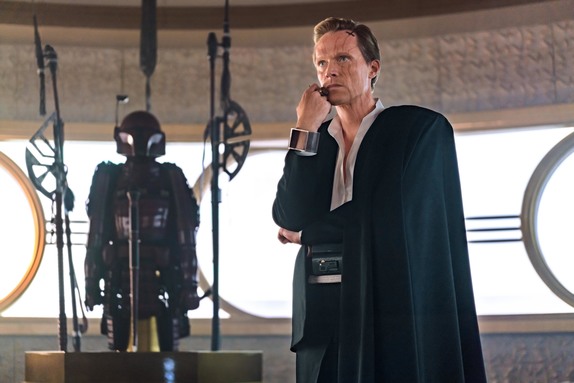 Solo is jam-packed with Easter eggs for the Star Wars faithful (hi there, Warwick Davis!), and the second half of the movie—especially the end—is well done and keeps you on your toes. Howard has to be given credit for pulling together a mostly-coherent story that looks great out of what could have become a total disaster. There’s more than enough room left in the conclusion for future Solo installments should the audience demand them, and I think Solo will do well on this front.

Unlike the new trilogy, the prequels, and Rogue One, Solo feels uncoupled from the complicated history of all of the movies that came before it. You might get an in-joke more because you’ve watched The Empire Strikes Back 500 times (and if you don’t feel anything when Han Solo first slides into the pilot’s seat of the Millennium Falcon, I’m sending for a medical droid), but encyclopedic Star Wars knowledge isn’t requisite.

There’s plenty of adventure to be discovered here for the uninitiated, and those of us in the loop can nod knowingly as the roguish winks come our way.