In the best way possible, of course. 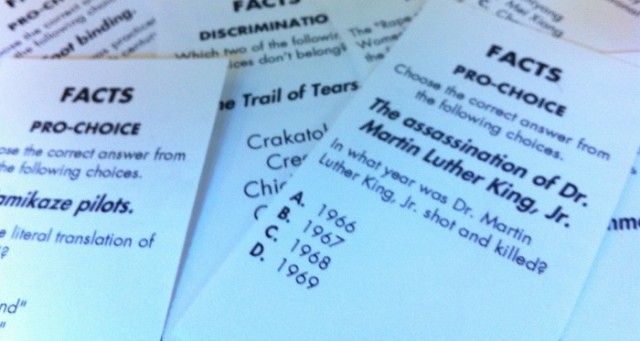 Like hanging out and playing stuff with your friends? Are you and your friends all monsters who react to awful news with laughter and tell dead baby jokes to each other for fun? Then you’re probably going to want this Terrible Things game in your life. Your horrible, horrible life.

The gameplay mechanics resemble what would happen if you mashed up Cards Against Humanity with Cranium — your goal is to make it from one end of the game board to another, which you do by completing challenges that are written on cards. 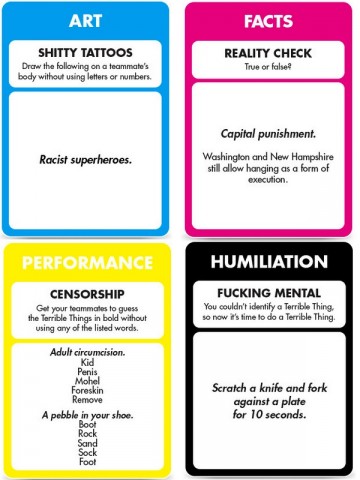 There are three categories — Art (which is like Pictionary), Facts (which is trivia), or Performance (which is close to charades but with some added improv elements). If you fail at a challenge, you have to pick a Humiliation card. As you can imagine, everything that’s written on every single one of these cards is… well, terrible. Just like the above.

Of course, the people in the official campaign video explain it better than we can:

The team hopes to raise $75,000, most of which will go to shipping and printing the cards — but if you’re a cheapskate with a nice printer, they’re also allowing you the option to download a PDF and cut everything out yourself. If you’re the opposite of a cheapskate and you’ve got money to burn, you can also put yourself down for some of their ridiculous perks. $100 will get you an extra deck of super-terrible “banned” cards, $6,666 (of course) gets you deeds to the souls of gamemakers Rob Hebert and Jack Bogdan, and if you throw down $10k, you get the chance to tattoo anything you want onto Rob’s body. Wow, imagine the evil you could do to that guy.

As of writing the team’s still short of their goal with $55,756, but they’ve still got 5 days left to make it happen. We sure hope they do, because regular ol’ Cards of Humanity was getting a bit too stale for our cold, black hearts.

(via Terrible Things and Kickstarter)