David Tennant Might Win An Emmy For Playing A Robot 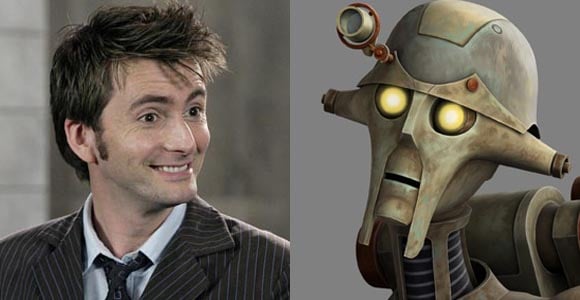 The 40th annual daytime Emmy Awards nominations were were recently announced and while “daytime Emmy” may bring to mind soap operas and talk shows, the awards also celebrate animation and children’s shows. And as it turns out, Doctor Who’s David Tennant is nominated this year for his role on Star Wars: The Clone Wars. Hit the jump for more, including rumors of his connection to Marvel’s Guardians of the Galaxy.

Tennant played Huyang, an old droid whose job it was to oversee lightsaber construction, on the animated series for two episodes. That was enough to get him nominated in the “Outstanding Performer in an Animated Program” category at the daytime Emmy awards. It just so happens he’s up against two other Clone Wars actors in the same category, Sam Witwer and Jim Cummings.

In other voice acting news, a rumor was going around Tennant was up for the role of Rocket Raccoon in Marvel’s Guardians of the Galaxy. It came from a Facebook fanpage called Marvel Cinematic Universe and folks ran with it. We would have liked for it to have some grain of truth but then came this tweet from Borys Kit of the Hollywood Reporter:

Fun Fact: Being told there is no truth to the rumor that David Tennant is going to voice Rocket Racoon in GUARDIANS OF THE GALAXY.

To which I replied, “Borys, that is an opposite-of-fun fact.”

Sigh. Oh well, at least we get to see him as the Doctor again real soon!

(via Doctor Who Tumblr)