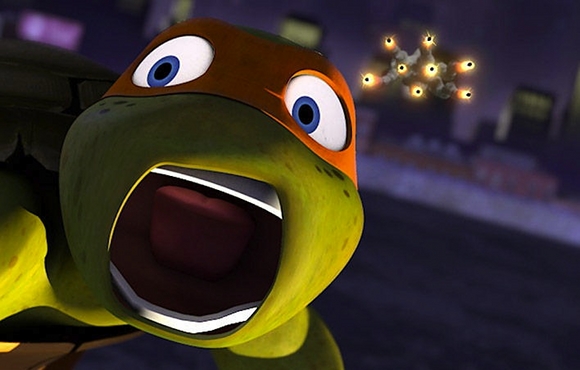 The Teenage Mutant Ninja Turtles just can’t catch a break. First they get turned into aliens, and now they’re losing their catchphrase.

Yep. For the reboot of the series, which debuts tomorrow on Nickelodeon, “cowabunga” is out.

What’s it being replaced with?

There was a lot of talk about what the new ‘cowabunga’ was, or whether it should even remain ‘cowabunga.’ We hadn’t initially come up with anything yet because we didn’t really necessarily need it [at the time].

But then when we were at the record, one of the actors — Greg Cipes, who actually plays Michelangelo — just kind of went for it. When he said it in the room, there were a lot of executives there. I think it was our first record. And it was that moment when he said it — I think he just really pulled it off and kind of won everybody over in the room. And it stuck.

Am I missing something here? I get that cowabunga is ’80s incarnate, but… booyakasha? The Ali G catchphrase? While not as dated as cowabunga, it’s just dated enough to make it really awkward to try and casually work into a conversation.

Cowabunga might not be gone for good—Neili emphasized that they could decide to bring it back at some point—but I’m honestly less appalled about them ditching it in the first place than I am about them going with booyakasha instead.

If you’re going to replace cowabunga with anything, it needs to be bangarang.