Julie Taymor Is The Only Spider-Man: Turn Off the Dark Director Eligible For A Tony 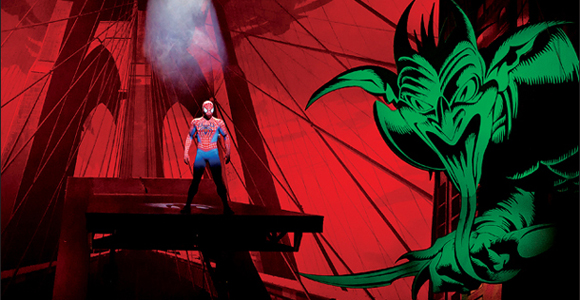 You know, we were saying to ourselves just the other day, “Hey, we haven’t heard anything terrible about Spider-Man: Turn Off The Dark for a while.” Sorry, guys. Looks like we jinxed you. The comic book-turned-Broadway musical that had been plaugued by disaster after disaster pretty much since its inception has made news today with two interesting bits. It’s been revealed that Julie Taymor is the only director of the show eligible for a Tony Award this year and the producers are being sued by one of their investors.

Philip William McKinley, who previously held the title of creative consultant but is now named director, will not be eligible for a Tony. From IndieWire:

“Yesterday, the work that she did on Spider-Man was acknowledged in some way by the Tony Administration committee which is the committee that looks into any issues related to who can be nominated.  In their off-the-record meeting they decided that it was Julie Taymor and not Philip William McKinley who would be the director eligible for a Tony nomination next spring.”

McKinley was the one who helped rework the play after its terrible reviews, along with writer Robert Aguirre-Sacasa.

The most expensive musical ever produced for Broadway was obviously in need of investors for that large-scale production plagued with delays. And now one of those investors, Patricia Lambrecht, is suing the producers. Lambrecht originally put up $2.5 million in collateral for the musical. Part of her agreement was that the theater the show was set to run in, on 213 West 42nd Street in New York, “would be returned to good condition at the conclusion of the production,” according to The Hollywood Reporter. “Lambrecht’s collateral was a guarantee that even if the show never opened, the theater would be paid for restoration costs.”

Lambrecht has just filed a lawsuit in New York for money she says is still owed to her by the show.

“Lambrecht pledged $2.5 million, but the agreement allegedly provides that she was to be paid a facility fee totaling $368,750. After the production experienced numerous delays, the show’s producers needed Lambrecht to extend the pledge of collateral. Since the show was becoming riskier, the cost of doing so became more expensive. Labrecht says that she got an agreement where the facility fee paid to her would be upped to $985,000.”

But so far, Lambrecht says she’s only received $360,000 from producers, leaving a balance of $625,000, plus seven months of interest and counting. And as for Taymor, just because she can be nominated for a Tony, doesn’t necessarily mean she will be.

(via Indie Wire and The Hollywood Reporter)

Julie TaymorSpider-ManSpider-Man: Turn Off the Dark