Taika Waititi on Which Thor Is the Focus of Thor: Love and Thunder 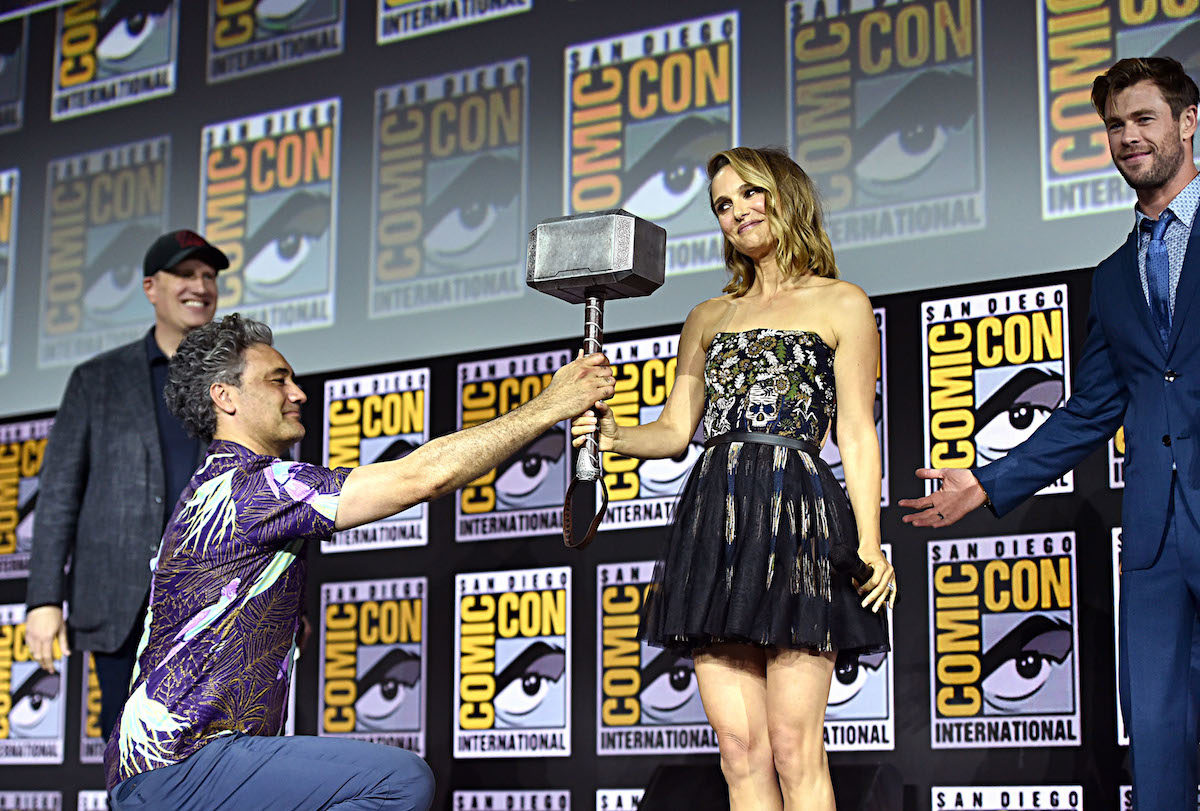 After it was revealed that Natalie Portman was returning to her MCU role as Dr. Jane Foster, and would become Mighty Thor in the upcoming Thor: Love and Thunder, there’s been speculation on which Thor is front and center in the film. Now director Taika Waititi has set the record straight.

Portman made a surprise return to the Marvel Cinematic Universe with the announcement at San Diego Comic Con that she was joining the ensemble of Waititi’s Phase 4 movie Thor: Love and Thunder. For those of you just joining the Thor-verse, last we heard, Thor and Jane had broken up by the events of Ragnarok, and Portman had a brief, blink-and-you-miss-it cameo when Thor goes back in time to The Dark World-era Asgard in Avengers: Endgame. Many of us assumed we’d seen the last of Portman’s Dr. Foster, especially since it was uncertain, in the Endgame days, whether Chris Hemsworth would be continuing on with the Thor franchise at all.

The Portman announcement made a particular splash at SDCC when Waititi, with his typical flair for the dramatic, went down on his knee and presented Portman with Thor’s fabled hammer Mjölnir. The news that Dr. Foster would wield Thor’s powers in the film suggests that they’ll be drawing from the Marvel Comics run in which the worthy Dr. Foster takes up the hammer and is known as “Mighty Thor,” and Waititi affirmed the title.

Since then, there have been questions about the shape of Love and Thunder. Would it still focus on Hemsworth, or was this more of a platform to centralize Portman’s Dr. Foster, potentially to have her join up in the future with Marvel’s growing ranks of female superheroes?

In an interview with MTV News, Waititi was asked which of the actors is the star of the movie. “It’s Chris. It’s a Thor film,” Waititi said. “He is Thor, it’s a Thor film. She’s in it.”

This seems pretty straightforward! In the same interview, however, Waititi jokes that he’s only on page seven of writing the Love and Thunder script (previously he’d said he was working on the title page), so it’s unlikely even he knows how screentime for the actors is going to shake out yet. The movie isn’t due until at least 2021, and any number of new initiatives could also spring up in the MCU by then. I’m still convinced Portman is coming back not for a one-off film but as part of a larger plan to give us a fighting force of female superheroes. But we can take Waititi’s comment as a confirmation that this is primarily a Hemsworth-Thor movie.

While I like Dr. Foster as a character, I’m also hoping that the “love” of “love and thunder” doesn’t mean that the film revolves around reviving her relationship with Thor. Portman and Hemsworth are both entertaining in their roles, and it’s perhaps not their fault that they lack chemistry with each other. Thor and Jane’s two-movie relationship was such a non-starter that it could be tossed aside with a few lines in passing in Ragnarok. I do trust Waititi to make a more compelling romance for them, if romance is indeed where we’re heading. But I’m crossing fingers and toes that the “love” in that title is there for Tessa Thompson’s Valkyrie after she finds her queen.

There’s so much potential for Portman in the larger MCU, and interesting places for the newly tetherless Thor left to go in the galaxy. Ideally, I’d love to see Jane Foster left as the Thor who safeguards Earth, while Hemsworth’s God of Thunder continues his space quests.

You can watch a clip of the interview with Waititi below.

.@TaikaWaititi confirmed that @chrishemsworth will be at the forefront of #LoveAndThunder alongside Natalie Portman’s #LadyThor. But when it came to more details on #Thor and #SuicideSquad, he was tight-lipped 🤫 #TIFF19 pic.twitter.com/5BVhAKMA0E