Get ready for the feminist comics event of the summer! 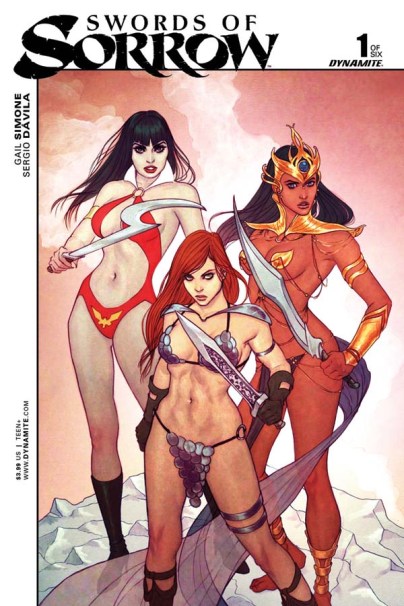 There is a dark Prince with a team of female warriors out to endanger Everywhere, Everywhen, and Nowhen, and it’s up to another group of female warriors who are unlikely allies forced to come together because of cracks in time to beat it back and save the universe. That’s the basic premise of the new Dynamite event from Gail Simone, Swords of Sorrows. However, that straightforward plot has an intriguing and exciting execution.

If you’ve been keeping up with our writing about Swords of Sorrow, including our interview with Simone, you know that it’s a comics event that focuses on female characters from pulp comics and fiction made up of a six-part main story arc and supplemented by spin-off issues focusing on one or two of the characters that are all written by women. Issue #1 is out today, and I had a chance to get an advance peek!

Before anything else, I need to clarify that I had no prior experience with any of these characters, and some of them, I’d never even heard of. I’d heard of Vampirella, Red Sonja, Milan Kato, and Irene Adler (who’s probably the only character with whom I’m familiar, and only through filmed versions of Sherlock Holmes stories). However, I had zero experience with Jana the Jungle Girl, or Dejah Thoris, Jennifer Blood, Jane Porter, or Lady Zorro. My concern was that this lack of familiarity would be a problem; that enjoyment of the Swords of Sorrow event would be dependent on knowledge of these characters and their histories. I needn’t have worried. Simone does a great job of introducing new readers to all of these women in ways that are both fast-paced and crystal clear. When Jungle Girl bounds onto the scene in the opening of the issue, you know exactly who she is. Simone had her work cut out for her in Issue #1, needing to quickly establish 15-20 characters in a way that didn’t slow the story down, but would also work for hardcore fan and newbie alike, and I think she strikes an amazing balance here. Having never read any of these women before, it’s now all I want to do, because they all seem so damn cool! Mission accomplished.

Simone’s storytelling is complimented beautifully by interior artwork by Sergio Davila. There may be a concern about how these pulp heroines are drawn – especially since they are historically scantily clad. However, there’s no need to worry on that score, either. Davila clearly has respect for these characters. He knows how to draw female anatomy in a realistic way, and despite several of these women barely wearing anything at all, they are never in poses that make them appear servile, or helpless. There’s no come-hither to be found here. These women look fierce and powerful, and I’m grateful for that.

Lastly, I love how unapologetically feminist this entire endeavor is. Obviously, it’s written by all women, so there’s that. But even within the world of the story, we see flashes of feminist gender discussion, some obvious, some not:

Swords of Sorrow has started off with a bang, and this event will be a great alternative to other upcoming summer comics events. I’d definitely recommend picking this up today! And while you’re at it, I’d follow Ms. Simone’s suggestion, too:

Today, when picking up Swords of Sorrow, pick up the wonderful SWORDS OF SORROW CHAOS PRELUDE by the great @MairghreadScott ! She nailed it!