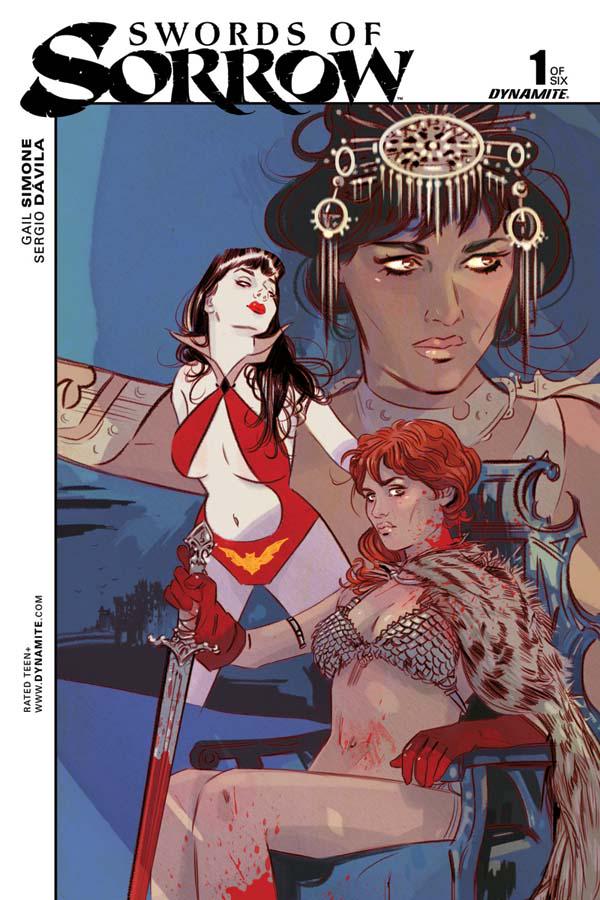 You’ve probably heard of Red Sonja and Vampirella. And these days you’ve probably also gotten wind of Dejah Thoris, the main lady lead in the John Carter of Mars stories, and perhaps even Mulan Kato, highly competent partner of the socialite/vigilante Green Hornet. Jungle Girl was created by Edgar Rice Burroughs, Miss Fury is basically a female Batman, but when we get to Masquerade and Lady Zorro, even I’m at a loss.

But here’s what they definitely have in common: they’re all in a massive crossover event from Dynamite Comics featuring the great women of pulp fiction, written entirely by female writers, and headed up and orchestrated by Gail Simone. Dynamite appears to have appreciated the success and support for their recent all-female creative cast lineups, from Legends of Red Sonja to their Red Sonja variant covers all featuring female artists. In fact, the bones of the crossover, which goes by the name Swords of Sorrow, sound a lot like Legends of Red Sonja, another miniseries project put together by Gail Simone that gathered more than a dozen of the comics world’s great female writing talents to work on a woven suite of short stories about the She-Devil that came together to tell a single broader narrative.

Swords of Sorrow changes this format just a tad with one central story told by Simone, with other writers providing spin-off titles. So who are the women of Swords of Sorrow? Well, the Hollywood Reporter confirms that horror writer Nancy A. Collins will take on Vampirella, with Ms. Marvel‘s G. Willow Wilson teaming with Erica Shultz on Green Hornet. Other writer/character pairings are unknown, but we now that Marguerite Bennett, Emma Beeby (the first woman to write for Judge Dredd), Windblade‘s Mairghread Scott, Mikki Kendall, Leah Moore, and some yet to be announced.

That’s a lineup with teeth, and I don’t mind saying so. It’s no wonder that the names on this list, both well established and up and coming, were chosen by Gail Simone herself. Simone said in a statement about the event:

I love pulp adventure, always have. But as male-dominated as comics have often been, the pulp adventure world seems to be even more so. Most of the big name stars and creators are dudes, and that’s fine, it’s great. But it hit me… what if that wasn’t the case? What if adventure pulps had also been written with female readers in mind, and awesome female characters in the spotlight?

On Twitter she explained another milestone for the series:

This book is stuff like the first time EVER in history a character from Robert E. Howard’s world clashes with one from Edgar Rice Burroughs!

The first issues of Swords of Sorrow will hit shelves in May.