We Could Have Seen Swamp Thing Fight Vampires and Werewolves, So Thanks for Nothing DC Universe

Readers, I’m still salty that DC Universe canceled the promising new series Swamp Thing. I know that the era of peak television is fickle and we all lose shows we love, but damn it this one had so much potential. Swamp Thing had a great horror tone with just enough soapy drama to make for a truly entertaining watch. And while I’m disappointed, no one is more so than showrunner Gary Dauberman.

Dauberman is still on the press tour for Annabelle Comes Home, which he wrote and directed. In an interview with SyfyWire, Dauberman opened up about the series’ abrupt cancellation, saying:

“It was a gut punch, because I am so proud of that show and Mark Verheiden leading the charge. The cast and crew did such an amazing job taking what is a really challenging and extraordinary comic and really bringing it to life. I think they did a hell of a job. I’m sad we are not going to be able to carry it forward into Season 2. I’m very proud of what we did achieve. I’m really happy that the critics and fans have been embracing it.

I wish I had some better answer as to why they did what they did, because it would help me sleep better at night, but I don’t have one. I really don’t. I work on the creative. The business side is not my forte. I’m sure they had their reasons.”

The series’ demise was rumored to be the result of a confluence of events. Some said that WarnerMedia and AT&T execs disliked the tone of the show, while others attributed it to low subscription numbers for DC Universe. Another culprit was the rumored loss of a $40 million tax credit thanks to a clerical error in North Carolina’s film and TV tax fund, which was later found to be false.

According to the Hollywood Reporter:

“Sources say the timing of the cancellation was spurred by the studio’s decision to bypass paying millions to store the show’s physical sets in North Carolina. That decision led to the cancellation leak. Contrary to some early unconfirmed reports, tax incentives had nothing to do with the sudden cancellation as Swamp Thing was awarded $5 million in incentives for the pilot and an additional $12 million for the remainder of the season. “We are as disheartened as others are to learn of the cancellation as the series did provide job opportunities in our state for our highly skilled film workforce,” North Carolina Film Office director Guy Gaster told THR.”

It’s a frustrating outcome for one of the best comic book series pilots I’ve seen in some time. Dauberman, who called the cancellation “a bit of a gut punch,” revealed that he had planned to expand the series to include other monsters like vampires and werewolves. “I was looking forward to telling a couple more self-contained stories, not self-contained itself, but like three arc stories too, coupled within the larger [mysteries],” he said. “Like a season-long mystery or engine, but also be able to explore some of those dark corners of the swamp where you get those, where it almost feels like a little bit like an anthology.”

He followed up by saying, “We could have done so much that I’m sad that we’re not going to be able to get to do in this incarnation, you know.” I can’t believe we’re never going to see Swamp Thing fight werewolves and vampires. As a Swamp Thing fan, this hits me right in my nerdy monster-loving heart. 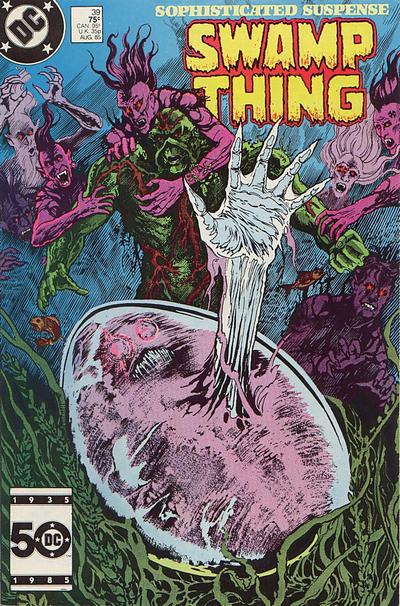 Alan Moore’s Swamp Thing run included vampires as antagonists, along with an appearance by John Constantine. The storyline saw Swamp Thing going to the town of Rosewood, IL, where he takes on an underwater community of vampires. That’s right, we won’t get to see Swampy fight water vamps thanks to a clerical error. Damn you, North Carolina film and television tax fund!