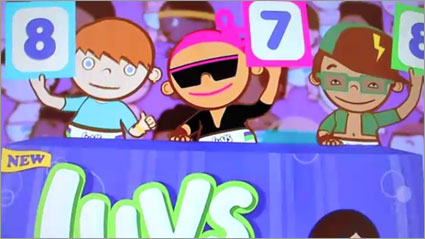 Wonderful news: It’s not just you! There are horrible commercials out there, and in a new poll run by Consumerist, readers have sounded off on the worst ads and advertising trends they’ve seen this year. And guess what, ad men? People are really sick of women being portrayed badly. And also: pooping contests, flash mobs, and press conferences. Take note, Don Draper et al.: your audience has evolved, and they are over the “take my wife, please” thing.

First, the worst of the worst. The commercial voted Worst Commercial was actually covered on Geekosystem, the headline for which made it into an Adult Swim bump. (I swear it did. I can’t find any evidence, but believe me. Even though I can’t find it on the Internet, it did happen.) And this was the “Poop There It Is” commercial by Luvs, which featured babies competing to soil their own diapers the most to prove that their (cartoon) diapers held the maximum capacity. Accompanied by a parody of a Tag Team song, a musical group from the 1990s that I’m not even sure I should boldface. Runners-up included the AT&T ad in which a woman berates her husband for signing onto an unlimited phone plan and the infamous “Hail to the V” ad by Summer’s Eve, Jeff Bridges endorsement notwithstanding.

Other notable winner-losers were the eager-beaver flash mob guy in another commercial for AT&T, who didn’t get the message in time (Most Grating Performance by a Human), the Car Fox for CarFax (Most Irritating Animated Actor), and Swiffer, for abusing the classic song that is now classically obnoxious, Heart‘s “What About Love.” People would also like to throw their TV set out the window over imitation Old Spice ads — we’re looking at you, Dairy Queen/Edge Shaving Gel Guy, John Behlmann — and Arby‘s 100% unsingable “Good Mood Food” jingle. (You couldn’t get it stuck in your head if you wanted to, and it feels weird for your mouth to sing the refrain, if we’re being technical about it. But the guy singing it can’t sing it either, so … JEEZ, Arby’s.)

But here was the advertising trend that was voted the absolute worst, the Trend That Needs to Stop Being a Trend: Men Barely Tolerating Their Wives and Girlfriends. The named offenders were Klondike and McDonald’s, the former of which featured a man being rewarded for the mere act of listening to his wife for five seconds. The McDonald’s commercial had a guy being faced with being kicked out of his house if he says something nice about football, causing a disagreement with a girly-lady-woman-sports-hater-shoe-and-ice-cream-lover. These are obviously not “Dumb Man” commercials, which I’m surprised wasn’t even offered as an option on which to vote. But they are still stupidly anti-woman, pro-man. Okay, we get it — these are the ads geared towards men (of the lowest common denominator). This is how advertising works: making one demographic very happy to be who they are and promising that their products will make them even happier. (Unless you’re a woman, in which case we need to be convinced that we are ugly and hideous before being sold makeup that will make us transform instantly into models like the Transformers. Skinny pink ones.) But why is it necessary to show men with women they don’t even seem to like? Are we supposed to feel sorry for them, then reward them with snacks like they’re little kids whose mom won’t let them play video games until after dinner? But mostly, both of these guys clearly have trouble communicating with these women — why are they even with them? Let alone living with them? Five seconds of conversation is that much of a task? Someone just get these poor dopes the Pos-T-Vac penis vacuum (winner of Creepiest Commercial of the Year, beating out Jell-O‘s “Pudding Face” campaign) and save them from themselves!