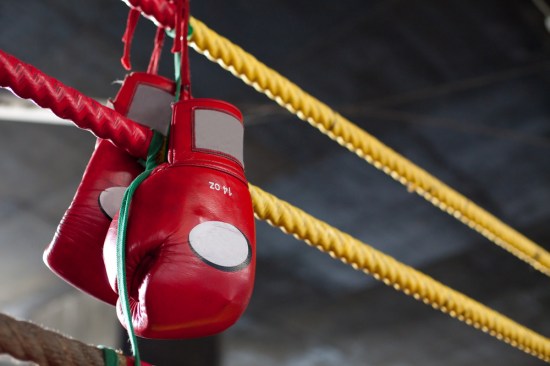 The FCC has always been something of a nuisance to broadcasters everywhere. The group’s vague, inconsistently applied policies strike fear in the hearts of executives everywhere who are afraid they might have to shell out a fine should a careless celebrity let a naughty word slip. Things look like they’re headed for a change now, though. Yesterday, the Supreme Court issued a decision on the FCC’s obscenity policies, and while it didn’t smack down FCC censorship wholesale, the Court did crack its knuckles and let drop a few fightin’ words. The stage is set for a battle; the next time the FCC and the Supreme Court inevitably meet, shit is going to go down, if you’ll pardon the phrase.
This ruling in particular had to do with some fleeting obscenity that took place years ago. Basically, in 2004, the FCC changed its policy to be radically stricter in the case of fleeting curse words, and almost immediately fined FOX TV and ABC TV for breaking the new rules. Since then, FOX and ABC and the FCC have argued about whether or not the FCC’s policies are vague and arbitrary, and whether or not the fines are valid. The Supreme Court has now ruled yes and no, respectively.

Sounds simple enough, but the really meaty part of this ruling is just a little deeper down. When ruling that the FCC’s policies are vague and ambiguous, the Court pointed to two different aspects. First, the FCC doesn’t really apply their policies universally, which is one of the main contributions to the vagueness. Sometimes you’ll be able to say something dirty and the FCC will let it slide. Other times, they’ll summon everything short of the wrath of Hell itself. If the Court’s decision stopped there, all the FCC would have to do is start fining everyone all the time, but the decision goes further to say that the other problem is that under its current policy, the FCC doesn’t clearly give reasons why one instance is okay and another isn’t. It’s at this point the Court lays down the gauntlet by offering the FCC a choice.

As of now, the Supreme Court isn’t going to make any comment on the constitutionality of the current policy, but it does explicitly say that the current policy is too vague. As such, the FCC has two options, either it can continue trucking along with its old policy that is going to get it in serious trouble, or it can update its policy to be less vague, but  if it does, that new policy will be scrutinized for constitutionality by the Supreme Court. Catch all that? Let me break it down with a fun analogy.

Right now, the FCC is running around with a rusty old shotgun. They fire it at things, but it’s not the most accurate of weapons and the collateral damage is getting them in trouble. On top of that, it’s in danger of backfiring and literally blowing up in their faces. For the moment, the Court will look the other way about the gun ownership and essentially grandfather them in with the shotty, but they will take the FCC to task on its inaccuracy with the thing. The FCC’s other option is to go out and get a shiny new precision rifle that will hit targets with ease, but the second they do that, the Supreme Court is going to sit down and consider whether or not the FCC should even be allowed to play with guns in the first place.

This ruling is by no means the end of obscenity law in the United States, but it does mark an important turning point from which there is no going back. Something about the way the FCC operates is going to change drastically when the organization makes its next move, and it’s wholly possible that the change could involve a righteous smackdown of obscenity-related censorship. It could, on the other hand, be resounding affirmation of a more precise and overall stricter FCC obscenity policy. Either way, stay tuned because round 2 is going to happen, and it’s going to be a fight worth watching. Place your bets.