We’ve been saving this one for a couple weeks now, ever since it was brought to our attention by a friend who picked up a Cosmo because there was nothing else to do while waiting for a train.  Now, there’s quite a bit of Cosmopolitan to get incensed about, but never before had we seen an editorial foray into something so relevant to our interests. In a single page, Cosmo posits four superheroes who are “focused on a woman’s needs,” including, we shit you not, a guy who is half Edward Cullen and half Jacob Black.

Once I surfaced from my black rage, I decided that the funniest thing about this is that if Cosmo had looked for canonical superheroes who would be good in bed, they would have had an entire list in a couple of minutes. Oh, I’m sorry. Super heroes who are “focused on a woman’s needs.”

Here’s the whole graphic, for your edification (click to embiggen, and remember to read the captions) 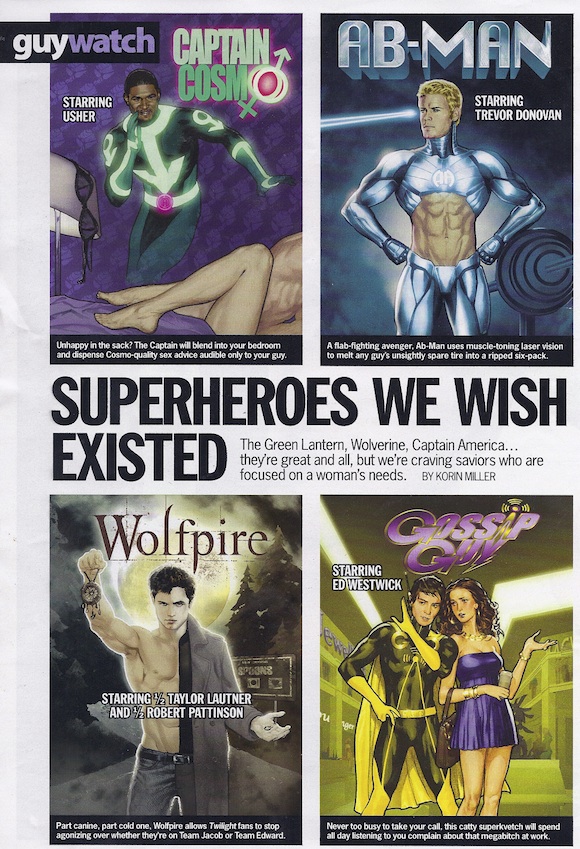 I’ll give you a moment. In the meantime, enjoy James‘ (of Geekosystem) reaction to it:

Ab Man would be the most successful businessman of all time. He’d just open up a shop, charge an expensive, but acceptable fee, and shoot abs onto us. I’d probably pay four figures for that, assuming he can give me abs that mesh with my body and skin. 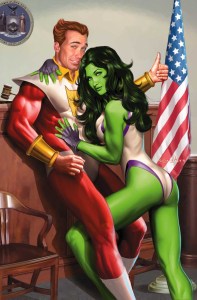 So, Cosmo, there’s no need to make up an absurdly superficial group of superheroes to celebrate all the worst stereotypes of the modern woman.  Did you know that there is an actual canonical Marvel superhero whose power is that he can make people feel pleasure?  Yup, Starfox (not to be confused with the Nintendo character) can “psionically stimulate the pleasure centers in nearby people’s brains,” leaving them open to suggestion and seduction.  Given physical contact and line of sight, he can even cause people to become infatuated with him.

So yes, he’s a walking date-rape drug, and had his psionic powers removed after a series of events that began with him successfully being brought up on rape charges by a woman who had consensual sex with him.  But think of all the sexual experience he’s got! If you can find him in a moment when he’s not mentally and morally altered by a clone of his evil brother who implanted false memories in his head… he’s probably a great lay.

See, even She-Hulk likes him.  When he’s psionically influencing her to.

So, what about a guy with endurace? One who can really go all night.  Sounds like you’re in the market for someone with a healing factor and the Marvel universe, again, has you covered.  You’ve got Wolverine, currently embodied by the renaissance performer Hugh Jackman; Luke Cage, the superhero that Isaiah Mustafa is practically begging Marvel Entertainment to make a movie about so he can be in it; Namor the Sub-Mariner, if you’re into that Michael Phelps kind of body; and lastly there’s Archangel, whose super powers almost literally include having a awesome bod. 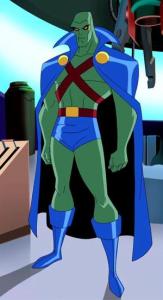 Moving away from the Marvel universe, there’s J’onn J’onnz, the Martian Manhunter.  Bear with us while I explain this one.

That opens up a lot of possibilities.  Don’t make me spell them out for you.

To sum up, there’s a lot of superhero options out there for you if your only criteria is supernatural sexual competency or attractiveness, if you take a couple minutes to think about it.