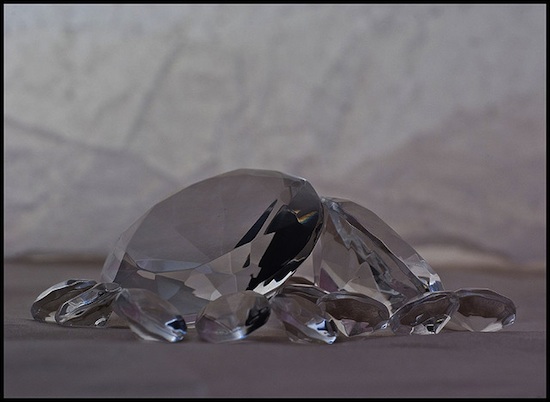 Move over, diamonds — there’s a new toughest form of carbon in the world. A new form of the element that blends both crystalline and chaotic structures has been created by researchers at the Carnegie Institution, and it’s so durable it can put a dent in the former world’s hardest substance and automatic relationship apologizer.

Carbon is one of the most common elements in the known universe, and it comes in a wide variety of forms, from pencil lead and charcoal, to graphene and diamonds. To make a harder-than-diamond form of the element, the Carnegie team built a structure called carbon-60 from buckyball-style carbon spheres. They connected these spheres, filling the gaps with the solvent xylene, and then started doing what you do when you want to make something stronger — applying pressure.

Under incredible stresses — about 320,000 times greater than Earth’s normal atmospheric pressure — some of those carbon spheres began collapsing into clusters of carbon atoms, while others maintained their structure, creating a super strong lattice formation. The result is a never-before-seen form of carbon that combines ordered and disordered structures. It’s the first time this combination has been seen, though mineralogists have theorized that such structures are possible.

Researchers know the substance, which has yet to be formally named, is harder than diamonds the same way you know your floor is harder than a dinner plate. When the two come into contact, your floor wins — similarly, when the new carbon form was created, it made a dent in the diamond anvil researchers were working with to create it, which we’re putting down in the loss column for diamonds.

Don’t worry, though, diamonds. We still like you, and will still purchase you on a market so rigged and hopeless you just have to laugh about its markups that strain the bounds of credulity. Because otherwise we might be faced with the prospect of finding a novel, individual, and meaningful way of expressing our love for another person, and man, that just reeks of so much effort that we’re already tired from thinking about it.