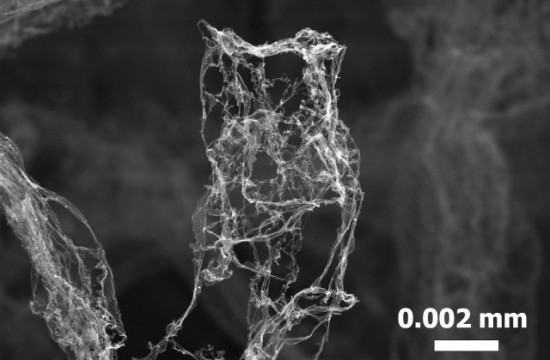 We already know that sheets of carbon atoms, also known as graphene, can work absolute wonders, so it should be no surprise that carbon tubes can be impressive too. Scientists in Germany have been experimenting with the potential of these tubes and have found that by weaving them at the nano and micro level, they can be used to make a material called aerographite. What’s so special about aerographite? It’s the lightest material in the world.

Scientists at Kiel University and Hamburg University of Technology jointly created the material, which has a staggeringly low density of .02 milligrams per cubic centimeter, blowing away previous record-holder aerogel which, at its best, had come in at around .1 milligrams per cubic centimeter. That, of course, doesn’t give you any real feel for how light this stuff actually is in a practical sense, so how about this: Aerographite is 75 times lighter than your average Styrofoam, 5,000 times less dense than water, and actually 6 times lighter than air.

“It’s lighter than air? So then, isn’t it like, flying all the time?” No, not really. In fact, the whole reason aerographite can manage to have such a low density (and therefore a low weight) is because it is so ridiculously porous. As a result, it’s pretty much “soaked” with air all the time. If you can vacuum the air out of it and seal it, however, aerographite is light enough that it would float.

To make the material, the researchers took some zinc oxide powder, heated it up to a near 900 degrees Celsius, crystalized it, and then made a little pill-like thing out of it. This process created a whole bunch of nano and micro tunnels in the zinc oxide, then the researchers steamed the little ball in a very carefully controlled environment such that bits of carbon could fill in the gaps in the zinc oxide, and the zinc oxide itself would then be steamed away as a gas. After all that, you’ve got yourself a batch of the world’s lightest material.

In its finished form, aerographite is jet black, can withstand large amounts of compression, has good tensile strength, can conduct electricity, and is superhydrophobic. As a result of these qualities, it could have implementations in batteries and supercapacitors — much like graphene — as well as air filtration, water filtration, and even certain kinds of water proofing. Its ultimate potentional is still up for grabs at the moment, but it’s still a record-breaker just by virtue of existing.

Want to see it do some tricks? Check out this video of little chunks of aerographite dancing around as they get electrically charged by a plastic pole and then transfer that charge to the table they’re sitting on.