Super Best Friends Forever Will Not Return | The Mary Sue 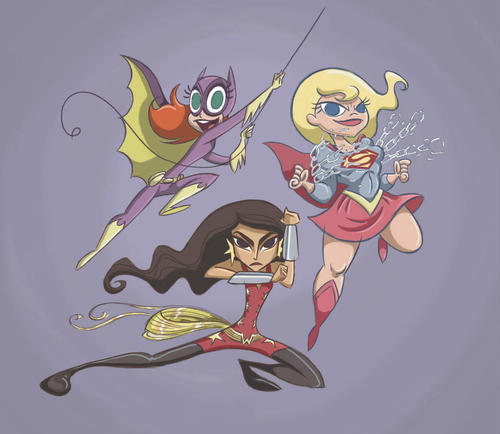 Lauren Faust tweeted this picture last night along with the text “Been missing these ladies lately…” This prompted our fellow ladies in comics blogger Sue from DC Women Kicking Ass to press for more information, and Faust, the showrunner behind My Little Pony: Friendship is Magic and The Super Best Friends Forever shorts for the DC Nation hour on Cartoon Network, confirmed the sad news that when DC Nation finally returns from an unexpected hiatus in January, we won’t be seeing any more of the SBFF’s brand of equal opportunity crime fighting any time soon.

@dcwomenkicknass I wasn’t available to do more, so sadly, none. Maybe someday….

Super Best Friends Forever, in case you somehow missed it after all the times we breathlessly posted videos of it here, was a beautifully animated series of shorts featuring Supergirl, Batgirl, and Wonder Girl, the three female sidekicks of the DC Trinity. Exactly five were made for the DC Nation programming block, one each broadly focusing on each of the girls’ home life, one about their team name, and a final one about, well, their struggles to be seen as crime fighters just as worthy as their male counterparts. It was also adorable, hilarious, inspiring, and fun and one of the most popular of the shorts produced for DC Nation, even spawning merchandise. Faust herself was taking the long view on things, referring to her stint on Power Puff Girls:

@dcwomenkicknass Who knows what the future holds. Took 7 years for PPG to get a green light, but it got made! — Lauren Faust (@Fyre_flye) December 5, 2012

For Ms. Faust’s sake (at minimum) I’d hope that in the nearly fifteen years since Power Puff Girls premiered that it had become easier to greenlight a cartoon show about female superheroes. The success of PPG alone should stand as evidence that the concept can succeed, and, as DCWKA points out, there’s one really big reason why DC should think seriously about not letting the SBFF shorts fade from the public eye. The first issue of an all-ages comic based on MLP:FiM is in its third printing, with more than 100k preorders… and it hasn’t even come out yet. For comparison, DC’s best selling issue last month, Batman #13, was confirmed for a second print a few days after it debuted. That first issue of IDW’s My Little Pony comic is doing half the two week sales of Justice League #1, the first title of the New 52 backed by months of fanfare and attention for DC’s massive reboot, before it has actually hit shelves.