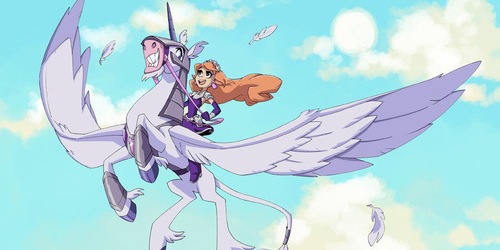 Cartoon Network viewers, fans of Young Justice, Green Lantern, and lots of people anticipating the premiere of the first Amethyst: Princess of Gemworld, and Black Lightning shorts were confused, Friday night, when they checked their television listings to find that in the hour when DC Nation normally aired, something else entirely was listed. It had been replaced by Dragons: Riders of Berk, a tie in series to Dreamworks’ How to Train Your Dragon. Many people assumed it was just a mistake, since even the creator of the Gemworld shorts, Brianne Drouhard, was under the impression that her work would begin airing tomorrow.

After all, DC Nation couldn’t go on hiatus again: it had only been two weeks since it returned with a new season of Young Justice and Green Lantern after a four month break. Could it?

Apparently it could, and for not reason that Cartoon Network has yet been forthcoming with. Dragons ran in DC Nation’s usual spot, and the only explanation the network has offered has been through its Twitter and Facebook pages. If you can call this an explanation:

Hey #DCNation fans! Have you heard?? DC Nation will return in January with all new episodes!

A bit cheery, for a situation with a complete lack of forewarning, and a bit vague for a response that came hours after the fact. Their Facebook post is similarly without substance:

Fear not, DC NATION fans! Green Lantern: The Animated Series and Young Justice will return in January with new episodes, only on Cartoon Network!

What adds an even weirder slant to the whole thing is that folks behind the shows that were scheduled to air on Saturday didn’t even know about them being bumped into the next year. From the tumblr of Brianne Drouhard:

So DC Nation won’t be back until January, or that’s what Cartoon Network is currently posting on Facebook. I know as much as you guys. I hope these shorts air eventually, it’s a shame.

It’s a very disappointing turn of events, not just for people who were really looking forward to seeing the tv debut of Amethyst, Black Lightning and his super powered daughters, but also for fans of DC Nation‘s two ongoing series, Green Lantern and Young Justice, who had just enough time to air two episodes from their new season before the unexpected hiatus. Hopefully Cartoon Network, DC Animation, or Warner Bros. will be forthcoming with some information soon.

(via Its Walky, Potato Farm Girl.)