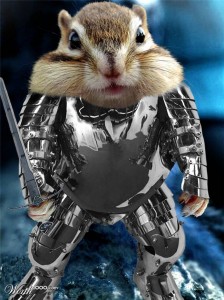 Imagine running on a treadmill. You got that in your head? It’s might not be uncomfortable, but it’s no sitting in a chair, right? Now imagine yourself running on a treadmill, only you’re wearing a suit of armor. It’s probably a bit more than uncomfortable at this point, right? Well according to science!, the answer is yes, to the point that the weight of said suits may have affected the outcome of some of history’s famous battles.

Monitoring volunteers fitted with 15th century armor as they ran on a treadmill, they found that (shocking!) those who ran while wearing the armor used a greater amount of energy, with side effects like restricted breathing and immense amount of pressure on the legs. And they were asking medieval war re-enactors, who were already practiced in the art of pulling off a suit of armor.

Leg armor went out of fashion (probably precisely for the reasons above) around the 16th century, but scientists are honing in on a few battles in particular that occurred beforehand whose outcomes may have been heavily influenced by the armor the soldier’s were wearing.

In particular, they are looking at the 1415 Battle of Agincourt, a part of the Anglo-French conflict, which the French lost despite vastly outnumbering their opposition. The French soldiers, foreced to march through a muddy field to get to the English line, were so heavily exhausted by the time the battle began that “they stood little chance.”

So I guess it’s about balance; do you want to cover your vital organs or actually be in the physical condition to fight? It should be pointed out that the Greeks and the Spartans fought buck naked, often with only a shield–and a string tying their unmentionables down to prevent flapping. Soldiers found a bit of a compromise as time went by, with the doing away of leg armor, which greatly improved the wearer’s ability to move. But even then, as lead researcher Dr. Graham Askew points out, “Yes, they could have removed the leg parts of the armor [back then], but it might have meant they would have been cut on the leg and killed that way.”

So basically we’re all gonna die no matter what we do. That chipmunk up there looks pretty prepared, though.