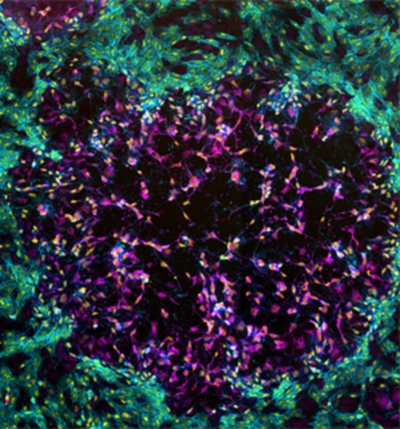 The striking image above, captured by University of Sydney researchers, shows the vaccinia virus — the vaccine used to beat smallpox — spreading from one cell to a whole layer of cells in a monkey’s kidney.

The goal of the experiment wasn’t to simply churned out a cool picture, but helps Dr. Timothy Newson and PhD student Dean Procter — both of the Australian National University’s School of Molecular Bioscience — understand how a virus causes disease after its genes have been mutated.

Like with mind-blowing images from space, this image is also a composite of various smaller images. The team only infected a few cells in order to monitor the natural spread of the virus, and after three days, the cells are fixed, which creates something of a still. After that, the researchers use colored chemicals to help differentiate parts of the still. In this image’s case, the pink-purple color shows infected cells, while yellow shows DNA and the turquoise shows the skeleton of the still.

Lucky for us that it turns out so pretty when researchers are trying to learn how viruses spread.