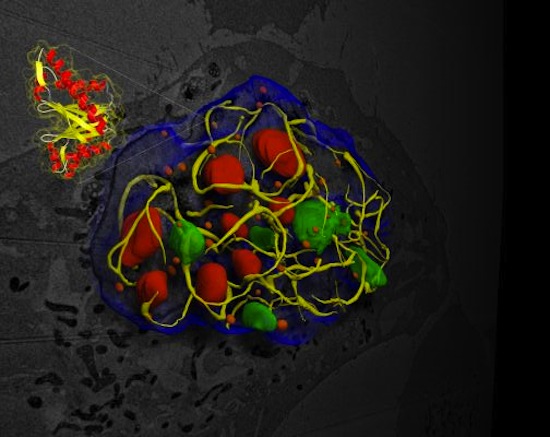 I think we can agree that the common cold sucks. I also think we can agree that it doesn’t suck nearly as badly as cancer. Researchers at the Salk Institute, though, may be on the trail of a way to turn the lesser of these two evils into a weapon in the fight against the other. This week, a study in the journal Cell reports that the Salk team has taken steps toward hijacking the common cold’s ability to disable immune responses within cells. That could lead to engineered cold viruses that hunt down and destroy cancer cells, while leaving healthy cells in peace.

When you get sick with a common cold, it’s because some of the countless cells in your body have been hijacked by the virus. In many ailments, that triggers genes active within the cell to issue a self-destruct command, because cells would rather sacrifice themselves than continue pumping out new copies of the cold virus to infect other cells. The common cold virus, adenovirus, can disable this command using a protein that suppresses the cells’ suicide genes, preventing infected cells from hitting the big red button and keeping them functioning as virus factories. That means a second wave of immune cells has to be dispatched to eliminate the hijacked cells, and you’re going to have a plugged nose and a scratchy throat for the whole ordeal.

The study released this week details new findings on the structure of the protein — E4-ORF3 — that adenovirus uses to keep cells from self-destructing and taking one for the team. The protein forms a molecular net around p53, a protein produced in healthy cells that activates the genes responsible for the cell wiping itself out. That quality also makes p53 a tumor suppressor, and when it shuts down, cancer can follow — p53 action is suppressed in almost all cancer cells, letting tumors spread through cells incapable of destroying themselves.

Understanding how cold viruses hijack our healthy cells is important in its own right, but this line of research could one day lead to engineered viruses that can be unleashed on tumors like viral attack dogs. The long term goal would be a line of viruses that could only make copies of themselves in cells where p53 is suppressed already — a self-perpetuating virus that only attacks cancer cells. That’s a way off — taking out just enough teeth to make adenovirus dangerous to tumor cells and harmless to normal ones is no small task — but the prospect of turning two diseases on each other is just too cool not to get at least a little bit excited about.