This is the First Color Image From NASA’s Curiosity Rover 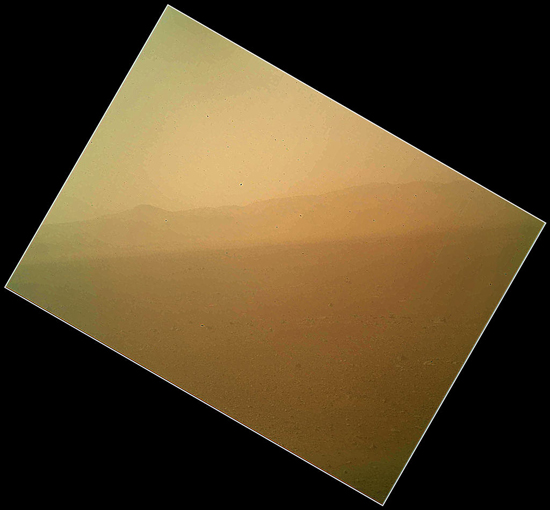 In case you haven’t heard, NASA’s Curiosity rover made it safely to Mars after a nail-biting descent that involved things like a sky crane with rocket boosters. The first images that the rover sent back came from its cameras that were designed to help it avoid obstacles rather than take artsy photos, so they were not in color. As the mission continues, though, Curiosity will have a much beefier camera called the Mars Hand Lens Imager, or MAHLI, to rely upon. This is the MAHLI’s first image from Mars.

Further snapshots will likely be far more detailed, as this one was taken with the transparent dust cover still intact. The cover surrounds the MAHLI, which is on a turret at the end of Curiosity’s arm, and is apparently coated with debris from the landing. The arm is currently in the stowed position, which is why the angle is a bit odd. Due to where the arm is stowed, this image is like looking from the front left side of the rover. Even with those minor inconveniences, the rim of Gale Crater is still visible in the background.

The dust cover won’t be removed for more than a week after landing, but when the team checks out the robotic arm the MAHLI’s attached to, they expect there will be more images available without the dust cover. Given that the arm has been stowed since it was packed up for its November 2011 launch, they’ll need to ensure complete functionality before using the appendage.

The purpose of the MAHLI is to take high-resolution photos of soil and rocks up close, but it functions perfectly well at taking pictures of the surrounding landscape. This is just a taste of the glorious Martian imagery we are sure to see in the coming weeks, months, and years.