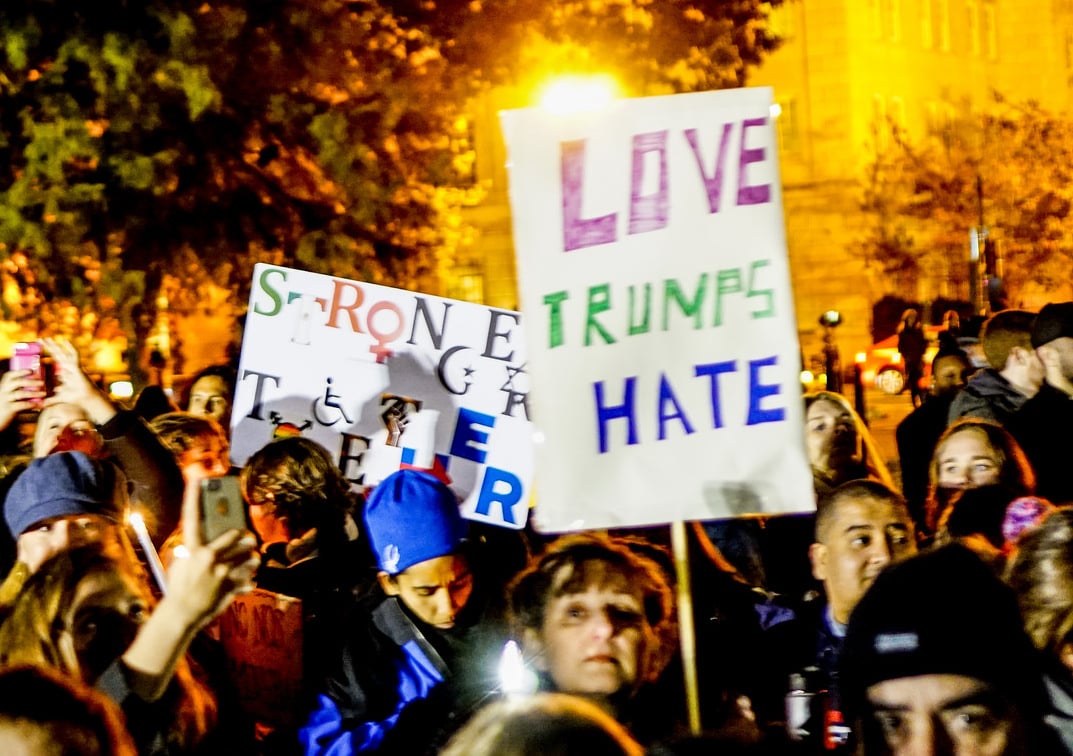 It’s been just over a week since the U.S. presidential election, and we’ve seen a rash of harassment and hate crimes in the wake of the results. We’ve also heard a lot of talk about how Donald Trump and his supporters aren’t racist, but his own response to learning of these shameful events has unsurprisingly left something to be desired.

Asked how he feels about the harassment of Latinos and Muslims during his recent 60 Minutes interview, his reply was that he was “so saddened to hear that,” after which he said “stop it,” turned directly to the camera, and repeated “stop it” again. The thing is that, even if he weren’t a demonstrable serial liar who will say whatever he thinks he has to, this response hardly comes across as sincere in context.

Sure, it’s an easy reference for his supporters when people continue to complain that he hasn’t denounced the terrible things happening in his name, but that’s about where its substance ends. The line of questioning started off on the topic of people across the nation protesting him, who he immediately claimed were paid protestors in an effort to invalidate sentiment against him. (Reminder: That paid protestor nonsense was entirely made up.)

When asked about the harassment and hate crimes that have sprung up, he started by claiming to be surprised and that he “hate[s] to hear that,” but he quickly switched tactics to denying there’s any widespread problem, again invalidating the criticism instead of simply denouncing what’s going on. Only when pressed on the issue repeatedly did he finally offer up the “stop it” response, which makes it seem more like a petulant child sighing out “fine” to end an argument rather than the words of someone who actually has compassion for anyone who’s been hurt.

These are not the words of someone who truly cares what’s happening, which is disturbing considering that he’ll soon be president of the United States. He’d much rather talk about something—anything—else, because he simply is, at best, not interested. At worst … well, you’ve probably seen how his potential staff has been shaping up.

True to form, his supporters are more worried about criminalizing protests against him than they are about the safety of marginalized groups. In Canada, on the other hand, recent anti-semitic acts were met with a swift denouncement from Prime Minister Justin Trudeau that mustered more sincerity in a tweet than anything that has come out of Donald’s mouth:

To the Canadian Jewish community: I stand with you. Our government denounces recent acts of anti-Semitism in the strongest terms.

Of course, at the end of the day, action against hate crimes is much more important than words. However, words are all we have to go on right now, and we’re still waiting for any indication that Donald truly cares at all except when he’s been backed into a corner and forced to respond. He should be able to fit a denouncement of hate into his schedule, as he seems to have plenty of time to ditch the press while he promises to lower the taxes of the rich and to go on a victory tour—you know, despite the fact that he’s too busy for his own fraud trial.

Sure, he could issue a stronger statement in the future, but at this point, the amount of time that’s passed with no real response speaks louder than any of his words could. Looks like we’re on our own, America.