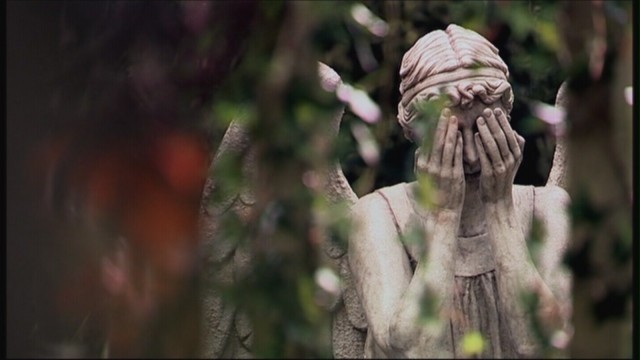 Oh man, you’re telling me, I still get so frightened how so many of his female characters act exactly the same as each o—oh, oh, wait, you mean for his monsters and stuff! Yeah, that makes sense too. They’re pretty scary.

In a poll of 4,000 Radio Times readers, three of the top five scariest episodes in Doctor Who history were written by current showrunner Steven Moffat, with the super-terrifying series three “Blink” one-shot on top. Only one from the pre-revival old Who—“The Seeds of Doom” with Tom Baker’s fourth doctor—made it onto the short list, below:

It’s worth noting, the poll only allowed readers to select from a fixed amount of episodes curated by the Radio Times editors. Even then, however, there’s certainly no denying scaring his viewers silly is one of Moffat’s favorite things to do. And he gets help from his production team, of course—according to team members from AvixVFX, whose job it was to create the design for the creepy-as-heck Boneless for the episode “Flatline” a few weeks back, their inspiration for the monsters came from those stringy-looking blobs of terror you get when 3D-printing errors occur. PSFK has more, including some printing error pictures which are pretty dang spooky in context.

In other will-probably-be-frightening news, the finale for the current season of Doctor Who, “Death of Heaven.” will run for an extended 60 minutes when it premieres on November 8th, so be sure to double-check your DVRs now! Here’s the official synopsis from the BBC:

With Cybermen on the streets of London, old friends unite against old enemies and the Doctor takes to the air in a startling new role. Can the mighty UNIT contain Missy? As the Doctor faces his greatest challenge, sacrifices must be made before the day is won.

The first part of the finale, “Dark Water,” premieres this weekend; both episodes were written by Moffat and directed by Rachel Talalay (yay, female directors!). Will you be watching?