The Mary Sue Exclusive Interview: Chatting Who With The Writers Of Titan’s Eleventh Doctor Comic 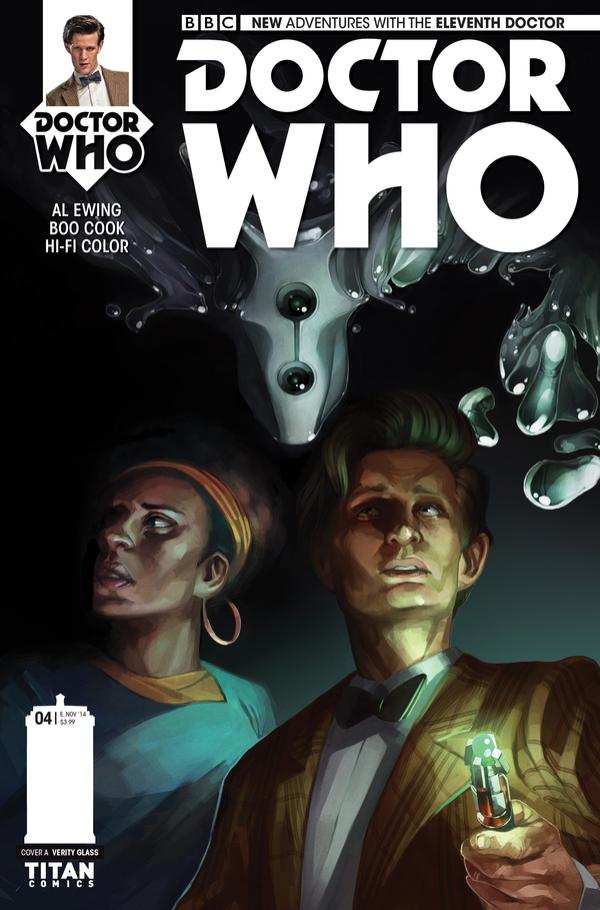 If you miss Matt Smith as the Doctor, you should be reading Titan Comics’ new Eleventh Doctor comic series. Writers Rob Williams and Al Ewing get Smith’s voice exactly right, he’s got a WOC companion, and there’s even David Bowie. Curious? Read on to hear what the Williams and Ewing have to say about their run on the title.

Sam Maggs (TMS): How did you decide to place the comic between Doctor Who series 5 and 6?

Rob Williams: That was given to us by editorial. I imagine Titan agreed [on] that with the BBC initially. It’s the perfect slot for further adventures of the 11th Doctor as he went off for a couple of hundred years, so there’s lots of scope there.

Al Ewing: It’s a great place to put the stories—because he’s quite a secretive sort, he could have got up to anything in that gap. (And probably did.) I think, unless I’m much mistaken, there’s a bit during one of the episodes where he actually talks about some missing adventures and Amy’s put out that there’ve been other companions. I’ll throw that one open to the comments section. 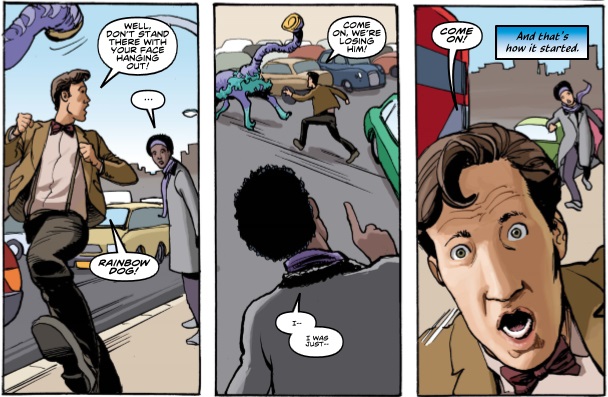 TMS: Alice is a fantastic character, and a companion of color. Can you talk a little bit about her creation and development as a character?

Williams: Al and I talked about what we could do to offer something different with the companions. With Alice we thought a slightly older companion than we’re used to of late would be a nice wrinkle and a different dynamic. She’s a little wiser and surer of herself and will call the Doctor on certain things. And her arc of dealing with grief after her mother’s death gave her a journey that people could relate to.

Ewing: I think from the start we wanted someone with a lot of agency and assurance, very much in the tradition of new series companions —someone who’d speak up if she had a problem, and could argue her point convincingly. And part of that was the age—having someone pushing forty, someone with a lot of life experience, gives her an additional gravitas that’s fun to work with.

TMS: Every companion brings something new out in the Doctor. What do you think Alice brings out in Eleven?

Williams: She stops him from slipping into unwitting condescension. He’s very old and very smart and is used to thinking people aren’t as bright as him. And Alice isn’t, of course, but she is sharp and I think he likes that she challenges him. You see when she first walks into the TARDIS in #1, she doesn’t do the whole ‘it’s bigger on the inside’ thing, she immediately says ‘we’re in a different dimension’ and he likes her immediately. Clever, clever librarian.

Which is a good example—she’s not afraid to call him out if she feels he’s being patronizing. In a lot of ways I’d say she is smarter than him— he might be a thousand-year-old Time Lord, but he doesn’t always have such a good understanding of what it is to be human. He’s not walked in her shoes. Occasionally, I find the viewer can get the impression that the companions are almost pets to him, funny little creatures that he can order about and give a pat on the head to when they’re good. Which is very unfair to the Doctor, and obviously not what he really thinks, but it is something we get into. And we come out the other side of that with a much more secure Doctor/companion relationship. It’s not one adventure and they’re firm friends— they grow together over the course of the run. 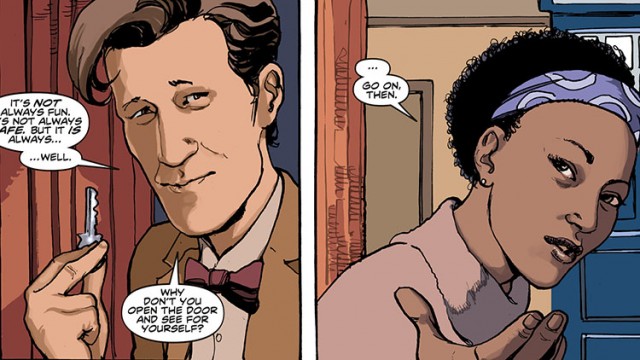 TMS: You guys really nail Eleven’s voice—I can hear Matt Smith talking from the pages. What do you love about writing his Doctor in particular?

Williams: Probably his voice. It is very distinct and it kind of sings. You can hear the 11th when you write. He lends himself to great dialogue. Lots of ideas and jokes and a bit of verbal diarrhea. Lots of energy. The tough thing when writing the 11th is not to overdo the dialogue, to cut back some really funny, sharp lines. You don’t want a comic with a ton of dialogue on every page. It’s a visual medium.

Ewing: He does have a particular energy that’s very hard to capture but infinitely rewarding when you do. You do feel almost beholden to getting as ‘Doctor-y’ a voice as possible, to the extent that it can almost topple into parody sometimes if you’re not careful. There’s a pressure to get it exactly right, and I’m glad to hear that people are reading the comic and hearing his voice come right off the page like that.

TMS: Alice and the Doctor are basically traveling with David Bowie now, in the form of ‘60s pop star John Jones. Why Bowie?

Williams: Because he’s a brilliant, constantly evolving (regenerating) artist and some of his incarnations seemed to come from another planet. So you ask yourself, “how did he get like that from starting out as a pretty bland skiffle musician?” Traveling with The Doctor, of course. It’s fun.

Ewing: Bowie is a similar pop-cultural force to the Doctor—as Rob says, the parallels are definitely there, in that he’s been part of the cultural map since the sixties, he regenerates every few years into a new creature, he travels time and space… but as the Doctor affects him, he casts his gravity on [the Doctor] as well. There are moments coming that have a certain Bowie-ish quality to them. I’ve been listening to ‘Sweet Thing’ on loop. 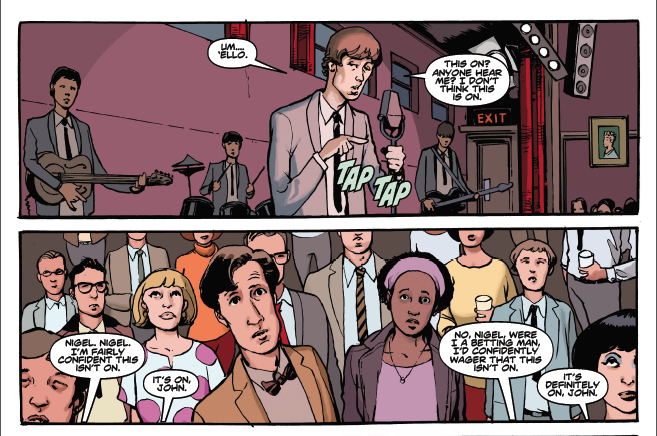 TMS: Can you tell us a little bit about where Alice, Robert, and John will be going on their next adventure with the Doctor?

Williams: We’ve got some fun things coming. #6 is a one-off very heavily timey-wimey [issue], which was a brain-twist to write but something to be proud of, I think. It uses the comic format in an interesting way. And there’s a classic Who villain in it. We have a two-parter called ‘The Eternal Dogfight’ about two warring space races with the Doctor and team in the middle. We’ll be showing a Doctor you’ve not seen before along the way too. We’re enjoying ourselves.

Ewing: We’ve got another companion ready to join the TARDIS crew who’ll be introduced in #4, as the Doctor deals with a base under siege from a mysterious monster that’s picking the crew off one by one. We’ve got Infinite Astronauts, ambulatory consciousnesses, the return of August Hart, more of that sinister presence stalking the Doctor, and more of the ServeYouINC corporation, up to their nefarious deeds—and wait until you meet their new CEO…

The Eleventh Doctor issue #4 is out now from Titan Comics!