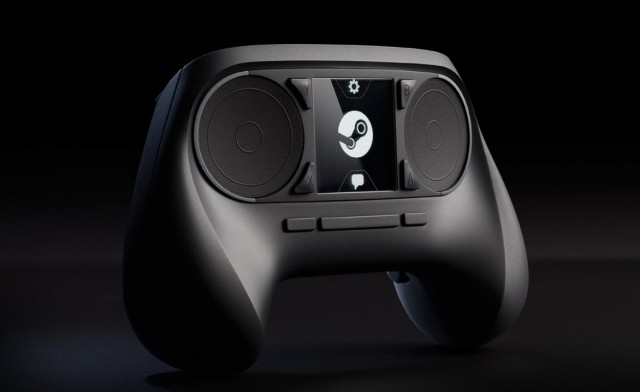 Steam’s been all about exciting announcements lately. They’ve already announced a version of Linux called Steam OS, and their Steam Machine console, and now they’ve announced the Steam Controller game pad. It looks like a robot face, but it also looks pretty impressive.

The Steam Controller prominently features two trackpads where traditionally a set of joysticks would go. It could take some getting used to, but Steam thinks it will be worth the learning curve. The controller features advanced haptic feedback since people are used to a tactile feel of pushing a joystiq. Instead of “rumble” tech, Steam is using “dual linear resonant actuators” that are attached to each of the trackpads. They claim to deliver a wide range of precise force and vibration.

The trackpads feature resolution not possible in previous gaming controllers, and Steam promises that any game in the steam library can be played on the Steam Controller, even those that until now have required a keyboard and mouse.

Since just having two touch-sensitive surfaces isn’t enough, the Steam Controller also features a touch screen in the center. The screen can provide secondary information like maps, and also act as a button, allowing an infinite number of actions without the need for physical buttons.

As for those physical buttons there are 16 in all on the Steam Controller, and they can be configured for each game. Users can even share their configurations for games with other users, and choose from lists of the most popular ones. They’re basically crowdsourcing controller configurations, and that’s pretty brilliant.

The Steam Controller will be part of the Steam Machines Beta program and users can sign up to try to get in on it now. The Beta version of the controller won’t have quite all the features promised in the release version. Notably missing is the touch screen which is replaced by an array of four buttons, and wireless technology.

(Steam via The Verge)