Good artists copy. Great artists steal. So do people who just want to own things. 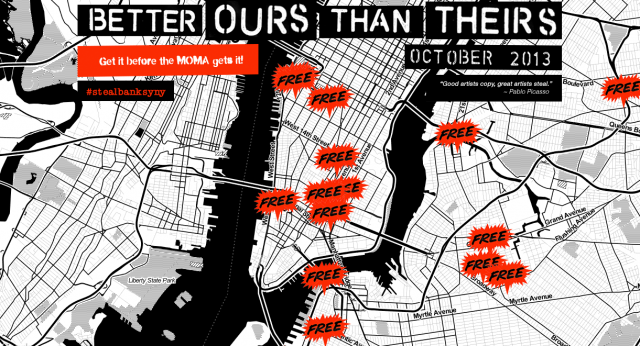 We’ve been a bit lax in reporting the past couple of Banksy pieces in New York, but that doesn’t mean he’s stopped unveiling them. If you want to play catch up, then the Steal Banksy website is a great place for tracking every painting across the 5 boroughs– and every time they’ve been defaced, too.

Steal Banksy’s mission? To show you where all the paintings are so you can go and take a piece of them for your very own. Their official statement puts it this way:

The inspiring thing about Banksy is he prompts people to shake things up. The art world, the world at large – nothing’s safe. For us, that has to include his work too.

We’re just asking the question: Wouldn’t you want a Banksy before MoMA gets it? Then do it! Get out to the street auction and make it ours, not theirs.

Now, unless you’re Carmen SanDiego, you’re probably thinking. would probably be very difficult to steal the side of a wall without a whole lot of effort. And even then, if you are Carmen SanDiego, why would you want a Banksy when you can have the Nairobi International airport and all the world’s salsa in one go? But people are still getting on board with the cause — one guy grabbed the doors off of the Crazy Horse car, and another picked the flower off of his World Trade Center tribute.

While the Steal Banksy people think that Banksy would probably dig their project, it seems as though the street artist felt he had to react to all the vandalism and theft that has plagued his open air exhibition. For one of his most recent works, he reportedly paid $50,000 to hang two canvases under an overpass West 24th between 10th and 11th Avenues, complete with an armed guard.

As much as some of us would love Banksy’s art to remain untouched and easily accessible to everyone, you’ve got to admit that it would be hella impressive if someone got a hold of those canvasses somehow. You know, not Ocean’s Eleven impressive, but still pretty dang cool.