What Did Carmen Sandiego Steal? - 50 Things | The Mary Sue 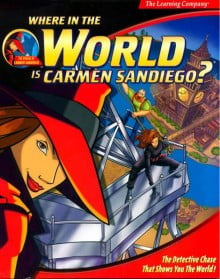 Where in the World is Carmen Sandiego? is one of those cultural touchstones that tends to be fondly remembered by the valuable 18-34 demographic, and has inspired countless nostalgia-based Facebook groups to that end: It was one of the first computer games that was any fun, and one of the rare “edutainment” games of all time that wasn’t desperately snore-inducing.

Sure, you were forced to learn about geography from puzzlingly unhelpful townspeople, (they knew obscure landmarks in cities, but not the names of the cities themselves?) but you were also up against one of the most ingenious thieves of all time. She even managed to steal the game-winning puck from the Stanley Cup, the Strait of Magellan (how is that possible? –Ed.) and even a monkey-eating eagle. If you’ve got to learn that Reykjavik is the capital of Iceland to stop that sort of ruthless criminal, it’s worth it.

Appendix: In table form, complete with locations stolen from and (spoiler) where you find them: