Banksy’s Latest Piece Is At Greenpoint, Says What Every Sarcastic Redditor Already Thinks

Go back to painting British cops making out! We liked those! 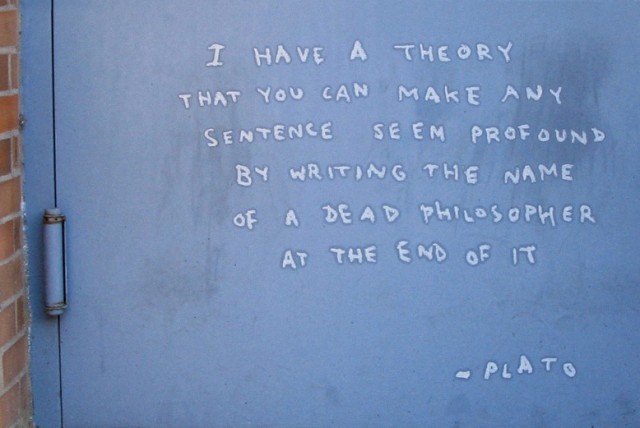 Everything is more profound when a famous intellectual says it. That’s why people on the Internet are constantly misattributing stupid quotes to William Shakespeare and Oscar Wilde. So if Banksy — who is also famous — says it, does that mean it’s officially his theory now? Or is Plato going to get credit for this one, too?

We’ve been pretty gung-ho about the Banksy scavenger hunt thus far (that mobile garden truck was particularly astounding), but… eh. This one, which is located on 266 Freeman Street, between Provost and McGuinness in Brooklyn, not as fun as the ones he’d unveiled earlier this month. There isn’t even an audio guide yet that we know of, which is even more disappointing. The audio guide is usually the best part. Then again, maybe he’s revving up to something even more impressive for today and this was just yesterday’s filler. We’ll see.

In the meantime, hopefully he’ll post a new one soon and someone will figure out where it is quickly so we can see whether or not it’s already been whitewashed or vandalized. You know, in addition to already being vandalization. Street art is weird, guys.