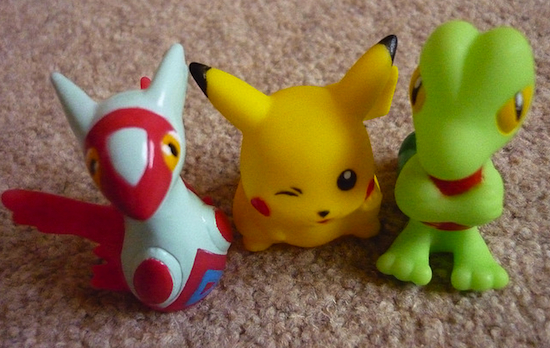 Next to demolition derbies and monstrously sized hamburgers unfit for human consumption, America can’t seem to get enough of the innumerable, money-gauging critters from Japan known across the globe as Pokémon. Demonstrating that there’s a clear difference between being a devoted fan and a lunatic who lacks a firm grasp on reality, one overzealous devotee of Pikachu and company felt that it was their patriotic duty to post a petition on the White House’s We the People website advocating that the nation stop sitting idly on its hands and have each of the 50 states select their own Pokémon to represent them. With a demand as bizarre as this, it’s no wonder that the petition was pulled. Guess the President is more partial to Digimon.

Before being quashed by the White House, the petition had been posted on Sunday and reportedly convinced over 700 like-minded fans to scribble down their digital John Hancocks in support of the cause. The mystery individual who had spearheaded the petition defended the proposal based on empirical evidence gathered from their own observance of popular culture — the most thorough and substantial kind of data there is when striving for legitimacy:

With the increasingly widespread use of technology and the ever increasing popularity of Pokémon I and many others believe that it is very important that the government recognize them.

Since attempting to force the President to make a pop culture institution politically relevant didn’t exactly fall within We the People’s draconian Terms of Participation, any hope of having each state represented by one of the 649 Pokémon is now a mere nerdy flight of fancy — an act no doubt lauded by the pan-regional and networked criminal organization Team Rocket.

Aside from the White House, the Reddit community of the r/Pokémon subreddit stood in staunch defiance of the petition, quick to call it frivolous and ill-timed especially in light of the nation’s current economical and societal woes. We can’t help but agree with Reddit’s sentiment since as much as we enjoy playing Pokémon Red and Blue, the little monsters aren’t very effective against unemployment rates and national debt.

(Betabeat via The Daily Dot, image via lydia_shiningbrightly)