Love her, you will. 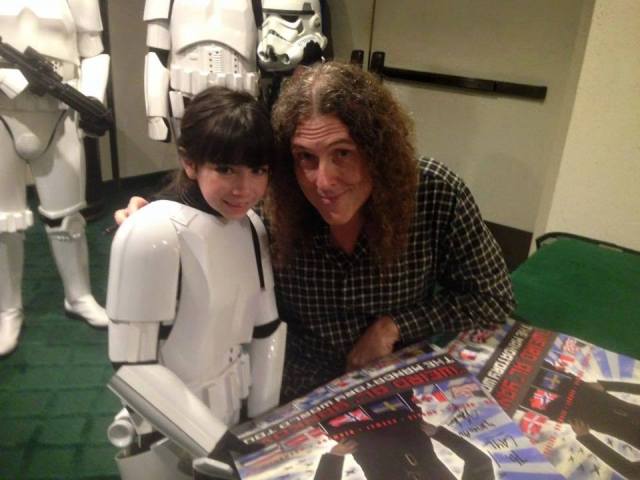 In a day and age when big organizations like Target have no problem admitting that gender has nothing to do with interests, it’s horrifying to think that a girl could still come home from school still ashamed to be into Star Wars because it’s a “boy” thing. (Tell this to Daisy Ridley, who is playing one of the leads in Star Wars: The Force Awakens, why don’t ya?) But it’s something that happened to Layla, an 8-year-old who discovered Star Wars through her father’s old toys, recently. Thankfully, an charitable group dedicated to the love of Star Wars used the Force to stop this injustice.

As CNN reported recently, the 501st Legion, an organization that “seeks to promote interest in Star Wars through the building and wearing of quality costumes, and to facilitate the use of these costumes for Star Wars-related events as well as contributions to the local community through costumed charity and volunteer work,” got wind of a young Star Wars fan named Layla Murphy after her mother, Nicolette Molina, posted about her daughter on the Facebook page of fellow Star Wars fan Jason Tuttle. In the name of the fandom, Tuttle rallied his troops, including his 501 chapter, to help this girl out.

First Tuttle sent a bunch of fan items (i.e. stickers and patches) to Layla to encourage her fandom. Then Layla was awarded a special set of Stormtrooper armor, previously owned by another young girl (Katie Goldman) who had been bullied for her Star Wars love. And after being given her armor, Layla was taken to a Weird Al Yankovic show, during which a number of members of the fandom were performing. Oh and Layla got to meet Star Wars nerd Weird Al as well. (Layla, us Weird Al fangirls at The Mary Sue could not be more jealous!)

From the sound of it, after getting so much support and love from the fan community to which she always, truly belonged, Layla is back to being her regular, Force-ful self. According to 501st Legion, Layla “now proudly carries the trading cards of her 501st supporters in a Chewbacca backpack and can’t wait for the next opportunity to troop in armor.” Oh, and she apparently loves it when people assume she’s a little boy under that helmet.

While this story is certainly an inspiring one, proving that fandom really can make a positive difference in a young person’s life, we can’t forget that there are still people out there that were not willing to let Layla be herself. According to Layla’s mother, after being ridiculed for being into Star Wars, Layla started “coming home more quiet and less of herself, and started asking not to wear her shirts or R2-D2 jacket.” (How can your heart not break thinking of this little girl thinking to herself, “This is not the droid shirt I’ll be looking anymore”?) Some of Layla’s bullies even started to question her gender identity, asking if she was “turning into a boy,” as if there would be something wrong with that being true as well.

Point is, kudos to you, 501st Legion for supporting this young fangirl and showing her haters that they better stay far, far away.