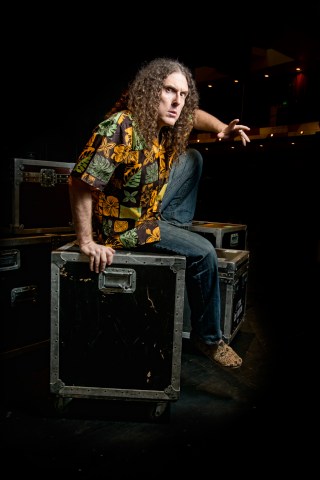 “You’re like the Voltron of the nerd things I love.”

I’m pretty sure that’s what I stammered when I met “Weird Al” Yankovic after his concert in Newport News, Virginia, on August 8, 2015. What kind of dorky thing to blurt out is that?! When you have the opportunity to meet a hero or celebrity, you want to play it cool, like a cucumber. Rehearse the speech you’ve prepared in the mirror for weeks prior. Do not smile like The Joker.

Or, be super nervous and excited. Block every thought from your head. Definitely smile like The Joker, and call your idol a team of robots who form one big nerd robot. It kind of makes sense!

Nerd Thing #1: Music.  Obviously, Al is a musician and songwriter. He’ll play the accordion so hard your brain will explode, and his ability to parody popular songs from all genres and eras is unprecedented. His knowledge and ability gets respect from artists and music nerds a million times over. Not only can he write clever lyrics in parody form, but he can write original songs based on the style of a known artist or type of sound. Al’s also had the same band playing with him for ages, and they’re amazing.

Nerd Thing #2: Comedy. Alfred Yankovic started out as a goofy accordion player, making up humorous songs about his family car and submitting them to the Dr. Demento show. Now, he’s the most successful parody artist in music, winning multiple Grammy Awards and selling oodles of albums (last year’s Mandatory Fun debuted at number one!). But he’s not just hilarious musically. Back when MTV focused on the M in TV, they gave His Weirdness the chance to put some Al in TV. He did sketches, introduced videos, and my personal favorite, conducted fake interviews with the latest pop stars on the charts.

Over the years, Al has participated in a literal ton (probably) of comedic projects, including podcasts, voiceover work, cameos in television and film, and he starred in his own vehicle, the cult favorite UHF. Ghandi II, anyone?

Nerd Thing #3: Geek Stuff If you’re reading this, there’s a pretty good chance you’re in the geek tribe. Sci-Fi, fantasy, comic books, video games, space stuff—you know what’s up. I love it all, but there’s a special place in my heart for Star Wars. When Al released “Yoda” in 1985, my 11-year-old heart exploded. When “The Saga Begins” came out in 1999, my under-construction (yet fully operational) 25-year-old heart exploded again. Listening to both songs, I knew Yankovic GOT IT. He was a geek too. Or nerdy. Dare I say, “White and Nerdy”?

Nerd Thing #4: Pop Culture. If it’s meant to entertain, Yankovic is aware of it. The man is a master of observing the trends and entertainers making headlines and creating something magical. Especially when it comes to his videos. Some are directly mocking the style of the original material but upping the goof factor, while other videos reflect the subject of the song itself. An example would be “TMZ,” his parody of “You Belong With Me” by Taylor Swift.

It’s funny because it’s true, right? Right, but it’s also a commentary on celebrity worship and the weird hunger we have for their public belittling.

Weird Al has been going strong for four decades. With so much talent and fun, what was stopping him from taking over the world? When I saw Al perform in 2003, he was supporting the Poodle Hat album. It was one of his least successful releases. The crowd was enthusiastic, but it was obvious they were mostly die-hard fans. Something was missing. What could unite Al’s robotic team to create the ultimate Yankovic form for everyone and not just hardcore geeks? *cough*World Wide Web*cough*

Fast forward to 2006. Social media is mushrooming. Geek culture is becoming “cool.” Al releases Straight Outta Lynwood and the single “White And Nerdy”,a parody of “Ridin'” by Chamillionaire. The album cracks the Billboard top ten! The “White And Nerdy” video depicts Al in his goofball glory, and now that YouTube is a thing, lots of people see it. Thanks to the wonderful Interweb, more and more folks are exposed to what Yankovic is up to, and the weird ball keeps rolling.

The ability to release songs digitally enables Al to parody pop culture in a fast and furious fashion. Most of the songs on Mandatory Fun, released in 2014, mock tunes that are still actively aired on the radio. The accompanying videos went viral. Nowadays, Al can appear as a guest on a popular internet series or podcast, which generates more buzz. For example, he appeared as Isaac Newton on an episode of Epic Rap Battles of History. And slayed.

The instantly gratifying culture of social media has made Weird Al the fearless leader of laughs, as he was meant to be. Once again, that Voltron of nerd things comment makes total sense now! Remember when I said that to him? That was awesome.

Perhaps you’re wondering how I met Al. I purchased the VIP package for his concert, and part of the package included a meet and greet after the show, along with kickass seats, some cool swag, and a pre-show party. YOLO, right?

The experience was surreal and emotional. Wandering the VIP party, surrounded by fellow fans (most were either wearing Hawaiian shirts or sporting tin foil hats), I got more and more psyched for the show itself, which didn’t disappoint. I was fifth row center. Al’s energy, vocal (and accordion) chops, and theatrics were amazing to behold up close. Sometimes I’d look behind me and see the almost 2,000 fans singing along to a silly song like “Eat It,” and my goofy heart would glow like E.T.’s.

Once the show ended (with a rousing rendition of “Yoda”—WOOOOOO!), reality hit me. I would meet Al. The nerves jumpstarted my guts. The VIP group was herded backstage and queued up. I was in the back, so I had a while to wallow in my anxiety. The dreamlike quality of the event intensified when a group of Stormtroopers and Darth Vader appeared to guard Al and stand behind his table. I did not want to say the wrong thing and get force choked.

Eventually, I was at the front of the line. The kind assistant took my camera and snapped a photo after I shook Al’s hand. He was sweet and soft spoken. After our photo was taken, I showed him my tattoo, in which I have spatulas incorporated in honor of the Spatula City bit in UHF. Then something crazy took place: as he was autographing my tour poster, Al casually asked me if I had tweeted a photo of myself before the show, because he thought I looked familiar. I’m sorry, WHAT?! Dumbfounded, I answered, “oh yeah, I did,” just as casually as he asked, not comprehending that WEIRD AL YANKOVIC saw my stupid tweet. 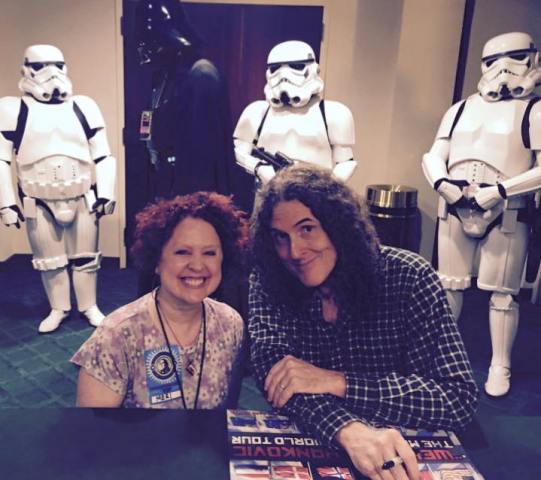 I was a stunned fangirl, to say the least. My hero was humble, kind, listened to me call him a cartoon robot, looked at my spatula ink, and somehow remembered me from a tweet I included him in.

“Weird Al” Yankovic has made quality, outstanding, and consistent work since the late 1970s. He can make humans of all ages come together to sing along, laugh, geek out, and relate to the pop culture shenanigans of the past, present, and future. He’s a Voltron of nerd things for EVERYONE!

If you’re an Al newbie and want some hints on where to start, his YouTube channel is the best place. More importantly, Al is touring the globe and it is MANDATORY FUN, so check out his website for dates!

Meri is a crazy cat lady who enjoys geekery, burritos, and hopes to someday dance with Tom Hiddleston. Check her out on Twitter and visit her blog. She’s also been featured on the Mouthy Broadcast podcast and The Peaceful Pirate.