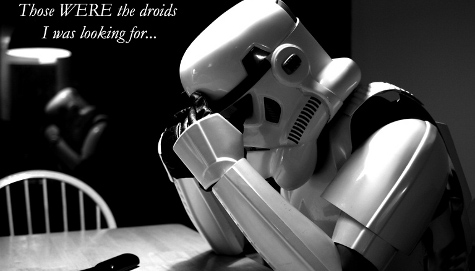 Despite the best efforts of the most die-hard/change-resistant Star Wars nerds around the world to boycott the Blu-ray release of Star Wars: The Complete Saga, the newly-released nine-disc set went on to break global sales records. What does this mean for those nerds? It means some of them probably bought Star Wars: The Complete Saga on Blu-ray within the first week of its release. “For the special features,” they’ll probably tell you.

Right after it was announced, the set — which features 40 hours of extras and all those wonderful additions George Lucas made — became both the highest ranking pre-order and catalog title since Blu-ray was invented. Now that it’s been released, it has sold one million units worldwide. In one week. Fans spent $38 million on 515,000 copies of the set in North America alone, and at a pretty steep list price of $139.99. (Though it’s available on Amazon for $79.99.)

Well, it’s not as if the marketing campaign took the “fly under the radar approach”:

The 13-month campaign to launch the SAGA Blu-ray and engage consumers around the globe began in August 2010. From Darth Vader at the 2011 Consumer Electronics Show (CES), a first look at San Diego Comic Con, a first-of-its-kind partnership with eBay, to creating the world’s largest lightsaber in the UK, the power of the Force continued to resonate around the world as fans came out in droves to have fun with that galaxy far, far away.

Plus, it’s Star Wars. There was no way, even with unpopular changes, that this was going to fail. We are not dealing with The Star Wars Holiday Special here — we’re talking about Lucasfilm’s money and all six Star Wars films — most of them … okay, some of them beloved — in one fancy, high-definition set with tons of all new extras. One misplaced “NOOOOOOO” was not going to derail this thing.

Congratulations on all that new money, George Lucas!

Top pic via Get the Big Picture