DO NOT WANT: Darth Vader Now Screams No in Return of the Jedi 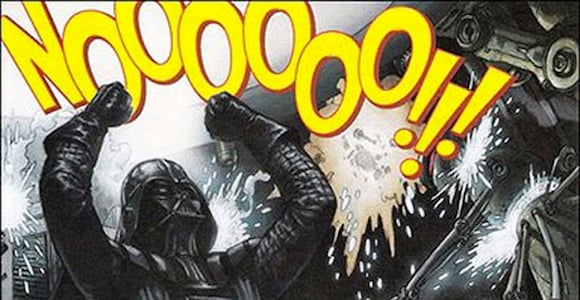 Hey, remember when we mentioned that George Lucas was likely revisiting the Prequel Episodes for the Blu-ray release of Star Wars? And that we were probably getting a CGI Yoda in Episode I, but not much else, really?

Remember when that didn’t really seem so bad?

What follows is a list of the known changes to the original Star Wars trilogy for the Blu-ray release, which has begun to trickle out as reviewers receive their copies. They’ve been confirmed by a lot of different not-Lucasfilm sources, and have yet to be denied by Lucasfilm itself. Prepare your inner child.

But the real kicker is the changes made to the very climax of the entire series, arguably of all six movies: the moment that Darth Vader renounces the Dark Side, murders his diabolical master, and truly claims his fatherhood. Turns out George Lucas thought the moment could be improved by incorporating a Wiley E. Coyote scream from the Emperor and one of the most parodied moments in the prequel trilogy: Darth Vader’s painfully campy Big “No!”. Here’s what the new audio looks like when synched up over the old footage:

No really, our go-to appropriate memes with which to respond to this kind of thing are all rendered ineffectually ironic by the fact that the quintessential “DO NOT WANT” is, lest we forget, sourced to an early Chinese bootleg of Episode III with terrible english subtitles where Darth Vader’s “NO” is translated as “Do not want.”

So this is all we can offer you: how much more palatable do you find Han Shooting first now?

Update: Lucasfilm has confirmed the changes.