Star Wars: The Force Awakens Star John Boyega Dismissed Critics Of Black Stormtroopers The Way They Should Be Dismissed

Get used to it. 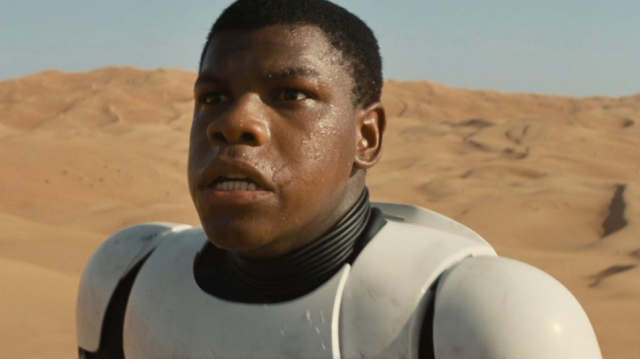 We didn’t start out in a super stellar place with The Force Awakens. When J.J. Abrams & Co. first announced the casting for Star Wars: Episode VII (as it was referred to back then), the glaring whiteness of it all grated on many who are understandably tired of spaces which could be so easily not-white being so heavily, and often nonsensically, whitewashed. Which is why it was a pretty pleasant surprise when, upon the release of The Force Awakens‘ first trailer, literally everyone we saw the face of was either a female or a person of color. In the words of Michael Scott, “oh, how the turntables.”

And so of course people are already complaining.

More specifically, people are complaining about there being a black stormtrooper. Oh, and also that there are women and people of color present because EGADS, it can only go downhill from here if we haven’t seen the white dudes yet:

I have a feeling the new Star Wars is going to be filled with PC, SJW trash.

Interesting that the first characters revealed in that trailer are a black man and a woman. Some of the comments are calling JJ an “SJW”. — Ian Miles Cheong (@stillgray) November 28, 2014

The black stormtrooper complaints seem to be mainly coming through via Youtube comments, which means we should all continue that Internet survival tradition of avoiding Youtube comments at all costs. Instead, let us focus on John Boyega’s A+ response to something he should never have had to deal with in the first place:

Let us also allow this man to shut down the ugh of it all:

Stormtroopers were all clones of a Maori dude, and Luke and Han wore the outfit once. You’re worried about a “black stormtrooper,” why?

The “black stormtrooper” is likely not one at all. I’d actually guess that John Boyega is likely the main protagonist. Let that sink in.

Can you hear that? That is my complete inability to wait for Boyega to become one of the biggest stars in the world.