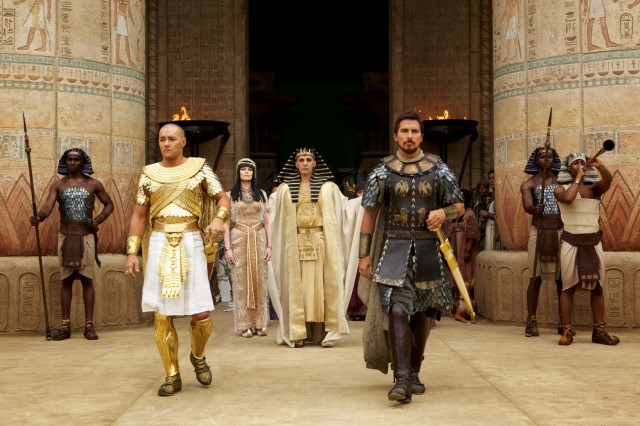 The frustration around Exodus‘ puzzlingly, absurdly white cast has been ongoing since, well, we all first realized how thoroughly whitewashed Ridley Scott had cast it. Well, let it continue further! On the heels of Scott’s multiple unsatisfying explanations of why he couldn’t/wouldn’t cast brown people comes Christian Bale. Bale would like you to know that he is completely onboard with Scott’s vision of a mostly-white ancient Egypt, and that he shouldn’t have had to miss out on playing Moses just because he has to “suffer with this skin and can’t deal with the sun.”

Ridley’s point, which I think is a good one, is what does an Egyptian look like? Especially at that time when this was the empire, so it would be a crossroads of Europe and the Middle East and Africa, and he cast accordingly. I don’t know the fact that I was born in Wales and suffer with this skin that can’t deal with the sun should dictate that Ridley should say, ‘In that case, he’s not the right man to play the role.’ I did the best that I can. I’m certainly not going to pass it up. It’s a hell of a role.

Rupert Murdoch, of all people, also took to twitter to defend the casting on the grounds that all the Egyptians he knows are totally white:

Moses film attacked on Twitter for all white cast. Since when are Egyptians not white? All I know are.

Okay, there are many shades of color. Nothing racist about that, so calm down! — Rupert Murdoch (@rupertmurdoch) November 29, 2014

Everybody-attacks last tweet. Of course Egyptians are Middle Eastern, but far from black. They treated blacks as slaves.

It’s been a pretty notoriously rough week in terms of white people trying to explain things away. Is anyone else just very tired?