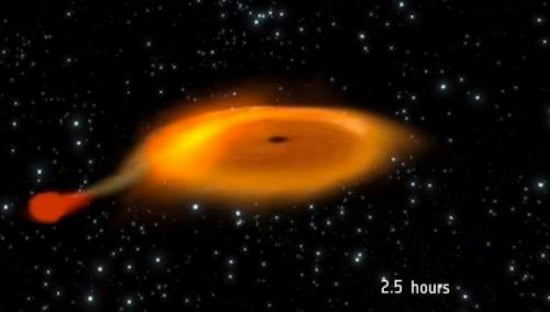 Astronomers at the European Space Agency have found a binary star-and-black-hole that orbit one another once every 2.4 hours, making them the most swiftly orbiting binary objects ever recorded. Of course, the star — a tiny red dwarf just 20% as massive as our own Sun– is being actively consumed by the black hole, so this is less like traditional orbiting, like we do with the Sun, and more like watching a cat play with a wounded mouse on a cosmic scale.

The binary system was identified by the combined efforts of NASA’s Swift space telescope and Japan’s MAXI telescope in 2010, but little has been understood about it until now. To complete its speedy orbits of the black hole that has it in a cosmic head lock, the star in the system — which has a wider orbit, as it is farther from the center of gravity the two objects share — is traveling at a breakneck pace of more than 2 million kilometers per hour. That’s nearly twenty times as fast as the Earth orbits the Sun, making this red dwarf the fastest moving object ever identified in a binary system. Meanwhile the system’s black hole, known by the catchy moniker MAXI J1659-152, has a smaller orbit, and is moving at a comparatively pokey 150,000 km/h.

I’m still getting dizzy just thinking about it.