NASA May Have Found the Smallest Known Black Hole 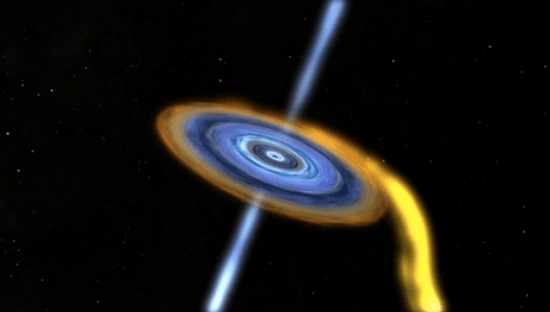 Using data from NASA’s Rossi X-ray Timing Explorer, an international team of astronomers has identified what could be the smallest known black hole. The astronomers found what is considered a black hole “heartbeat,” a type of X-ray pattern, named as such due to its resemblance to an electrocardiogram. The binary system where the black hole was found, named IGR J17091-3624, consists of a normal star and a black hole that weighs less than three times the mass of our sun, which just so happens to be near what is thought to be the boundary where black holes are even possible.

Astronomers first became aware of the black hole back in 2003, due to gas from the normal star streaming toward the black hole, forming a disk around the hole, and being heated to a high enough temperature that emits X-rays. Data on the black hole suggests the heated gas becomes active every few years, which began again this past February and is still going on.

The distance of the system, which located toward the constellation Scorpius, isn’t yet known, and astronomers believe it could be as close as 16,000 light-years away, or farther than 65,000 light-years.

Astronomers believe IGR J17091-3624 is the smallest known black hole due to the aforementioned heartbeat. Astrophysicist Diego Altamirano of the University of Amsterdam, who is also the lead author of the paper describing the findings, explains, “Just as the heart rate of a mouse is faster than an elephant’s, the heartbeat signals from these black holes scale according to their masses.” Astronomers suggest that IGR’s heartbeat can cycle in as little as five seconds, which, going by Altamirano’s analogy, would describe a very small black hole.