Stanley Tucci Made Us Thirsty … With His Negroni Making Ability! 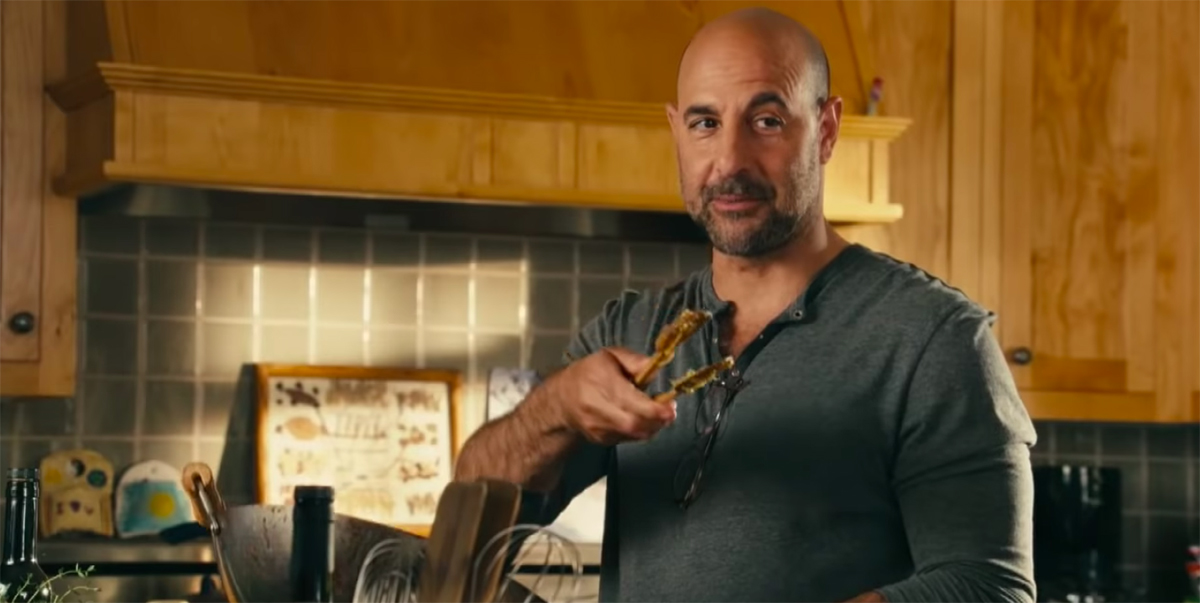 Ever asked yourself how you would feel about Stanley Tucci saying “sweet vermouth”? Well, he heard our silent prayers and decided to make a negroni in a very tight black shirt. So yes, the unexplainable thirst that many of us have for Stanley Tucci rages on, now supplemented by liquor. This time, Stanley Tucci thirst comes with lessons that can help us towards our bartending license, so at least there’s that.

A video started to make waves on Twitter that showed Tucci in a black shirt and his signature glasses while making a negroni with a large orange slice. Truly, this seems like a dream domestic situation, if you’re asking me.

I thank the gods because I had no idea Stanley Tucci had an Instagram account until this video made the rounds on Twitter yesterday. Shared by Rachael Conrad, she just wanted to bless our Twitter feeds. But because of quarantine, our normal, manageable thirst for Stanley Tucci is … apparently, dialed up to an eleven.

May this video of Stanley Tucci doing a cocktail masterclass be a blessing upon your twitter feed. pic.twitter.com/62R1TjsAqA

Even Conrad was surprised by the response to her sharing the video.

But then again … can you blame us all? Tucci was wearing a belt while inside.

I mean… the man is wearing actual pants. And a belt. And is making a Negroni. And he’s Stanley Tucci. I mean…

I was not prepared for the arms.

everybody – literally every single adult human in the world – would fuck stanley tucci and if they say otherwise they’re lying https://t.co/sPpzUjBD5T

An Ode to Stanley Tucci’s Forearms

When Stanley’s cooking dinner
his sleeves get in the way.
But when he rolls them up
it makes us feel some kind of way.

It’s not just that they’re hairy,
or muscular, or tan.
It’s all these things and more
that give us no choice but to stan. pic.twitter.com/tm0uIDx1aF

Stanley Tucci making you a Negroni but with 350% more of Tucci’s arms and smile pic.twitter.com/ZLvxcX7r0v

Stanley Tucci and Jeff Goldblum should have a show where they make cocktails and sing/play piano. https://t.co/22KgCXHhWx

Nothing — and I mean nothing — has soothed me in the last six weeks quite like the way Stanley Tucci making a “Negroni” on Instagram has. pic.twitter.com/LzlbE3iJWL

Sir, Stanley Tucci could serve me wine and tell me it’s butter and I would gladly obey his instruction. https://t.co/8Nlerhfzz4

I want Stanley Tucci to manhandle me the way he slams down his cocktail ingredients pic.twitter.com/W9Fg3YCQOV

Stanley Tucci is such a fancy person. Like that video going around seems so fancy for just being at home. Like he’s wearing a whole belt indoors! A belt!

Even Chris Evans couldn’t help but chime in to share his love of Stanley Tucci in the midst of this thirsty craze.

On some(most) days after we finished filming on the first Captain America movie, Stanley would make us martinis in his trailer.

He’s an absolute gem. However cool, fun, witty, and charming you think he is, double it and you’re halfway there. https://t.co/mEJzuV8oAH

The facts are these: Stanley Tucci making a negroni has helped give many of us something to look forward to in these dark times. Meaning we’re hoping he’ll post more to get us through this trying time.