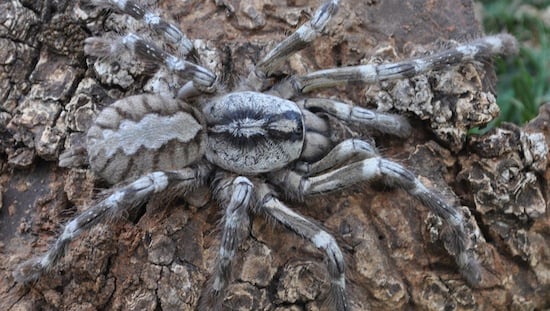 It’s time to add Sri Lanka to the list of places I probably won’t ever go, because a new species has been discovered there that’s both face-sized and features far too many legs.  The new tarantula is named Poecilotheria rajaeia, belongs to the colorful, venomous tiger spider group, and was discovered lairing in an old hospital. Which in my book turns the creep factor up to 11.

“This species has enough significant differences to separate it from the other species. I absolutely would love to see DNA sampling done — on all the species of Poecilotheria.“

That’s right, the genus is Poecilotheria, which arachnologists called “Pokies” for short. By all means, give them a cutsey name, because God knows that’s just what a spider with an eight-inch leg span needs.

Look, I know that tarantulas aren’t very deadly to humans, as spiders go — they just look scary. If you set aside for a moment that they are horrific giant spiders, though, these creatures are actually kind of beautiful. The Poecilotheria rajaeia has a pink abdominal band, and unique, geometric-patterned leg markings. As a tiger spider, it’s related to South American tarantulas, and also to what is generally considered the world’s largest spider, the Goliath birdeater — so named because it is enormous and has been known to eat birds. A little on the nose as far as naming conventions go, but it also ensures that you will stay far, far away from creatures with that name, which we’re willing to call a great idea.

Interestingly, the arachnologist team who discovered the new species, led by Ranil Nanayakkara, co-founder of the group Biodiversity Education and Research in Sri Lanka, named the spider after someone other than themselves. Smart! Way to redirect the spiders’ attention to its namesake, police inspector Michael Rajakumar Purajah, who led the the team safely through the semi-evergreen forests of northern Sri Lanka shortly after a civil war in their quest to discover new species.

Nanayakkara offered a few choice facts about the ecology of the new find, as well:

“They are quite rare. They prefer well-established old trees, but due to deforestation the number have dwindled and due to lack of suitable habitat they enter old buildings.”

All right, so we can’t blame them for seeking out buildings and creepy old hospitals, but this is still one step closer to the giant spiders who accosted Radagast the Brown, and we can’t be alone in being really, really not OK with those being things that are real.

(Wired via NYDailyNews, image courtesy of )