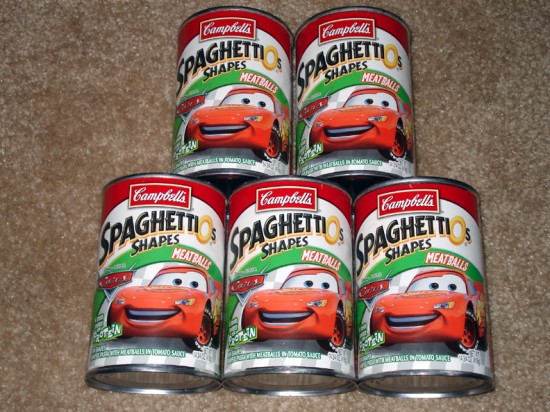 Wipe that grin off your face, Lightning McQueen, your meatballs might be undercooked.

…And more sentences you’ll never read anywhere else, ever.

The recall only effects American retailers and buyers, specifically cans of the above varieties bearing a “Use By” date between June 2010 and December 2011 with the plant code EST4K.  Some cans may have been manufactured back in 2008.

If you’ve got any don’t eat them.  This should go without saying when you’re considering two-year-old undercooked beef.  Honestly, though.  If you’ve still got cans of SpaghettiOs from 2008, you’re probably never going to eat them.  Throw that stuff away, man.  And try to clean out your kitchen more often than the US Department of Agriculture’s Food Safety and Inspection Service inspects Campbells factories.

The official Dept. of Agriculture statement can be found here.

The official Campbells statement can be found here.