Going to be Near D.C. Next Week? You Could See the Space Shuttle Fly 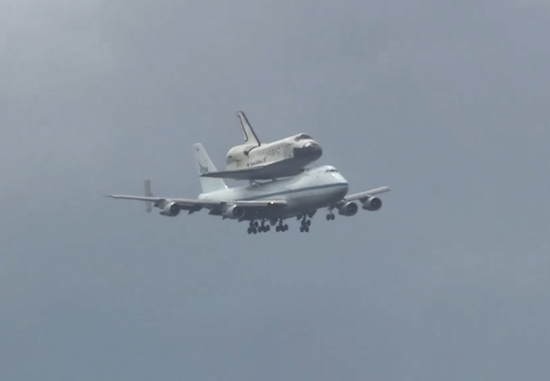 If you happen to be hanging around the nation’s capital on Tuesday, April 17 between, say, 10 and 11 A.M., you might want to look up because you might miss the last time Space Shuttle Discovery is in the air. It won’t be under its own power of course, but strapped to the back of a modified Boeing 747 headed towards Dulles International Airport. Which, actually, might be just a but cooler than seeing the Shuttle by itself.

Since the retirement of the Space Shuttle fleet, NASA has been stripping down the orbiters and preparing them for their new homes at museums across the country. In order to get them there, the space agency will be carrying out ferry flights — in which the orbiter is bolted to the back of one of two modified 747’s NASA maintains for the task.

Though designed to circle the Earth, the Space Shuttle has had a close relationship with the Boeing aircraft since its first flight tests in the late 1970s. It’s somewhat fitting then that the specialized aircraft will taking the orbiters on their last flights.

During its final flight to Washington, D.C., Discovery and its carrier plane will cruise over a number of landmarks, including the National Mall, Reagan National Airport, National Harbor, the Smithsonian’s Udvar-Hazy Center, finally landing at Dulles International Airport. The aircraft will be about 1,500 feet off the ground, and should be visible to onlookers.

Of course, with a billion dollar space ship on its back, the 747 won’t take any chances and won’t fly if the weather will not permit. However, if the sky is clear, it’ll be a great chance to watch a historic event. It’s worth noting that while the Space Shuttle launches are extremely dramatic, there were over 130 of those and only 87 ferry flights — making them something of a rare occurrence.

Even rarer will be these final flights for the remaining Shuttles, of which there will be only three. Discovery is headed to the Smithsonian Udvar-Hazy Center, Endeavor will go across the country to the California Science Center, and the test craft Enterprise is bound for New York City’s floating Intrepid museum. Atlantis, sadly, will not take to the skies again as it will be housed at the Kennedy Space Center Visitor Complex.